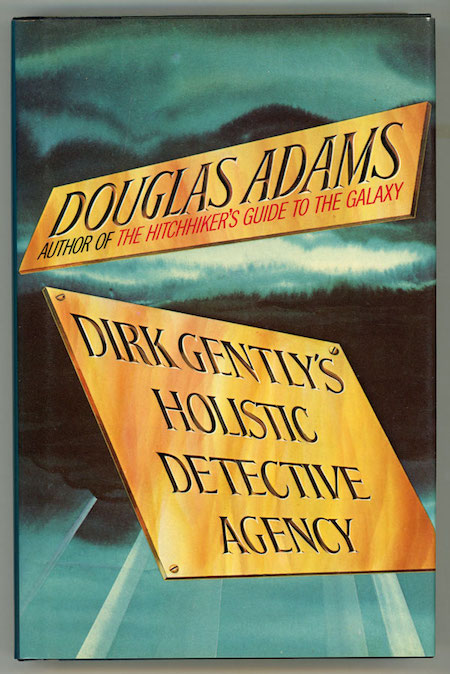 Dirk Gently, self-proclaimed Holistic Detective, is convinced that even the most inexplicable mystery can be cracked via deep insight into the fundamental interconnectedness of all things. (He is, that is to say, a semionaut; or an affectionate parody of one; he also bears more than a passing relationship to Wodehouse’s Psmith.) Gently’s theory is put to the test when his old schoolmate, Richard MacDuff, apparently murders his boss, Gordon Way. Way was killed after MacDuff attended an event during which Professor Urban “Reg” Chronotis, performed an inexplicable magic trick… and at the finale of which an Electric Monk and his horse traveled from an alien planet to Chronotis’s bathroom. Might ancient astronauts, time travel, and Coleridge be involved? Is the fate of humankind at stake? Is this, as the author claimed, a “thumping good detective-ghost-horror-who dunnit-time travel-romantic-musical-comedy-epic”? Yes.

Fun facts: Dirk Gently would reapper in The Long Dark Tea-Time of the Soul (1988); Adams never completed the third installment in the trilogy. Samuel Barnett (as Gently) and Elijah Wood (as Gently’s sidekick, Todd) starred in the 2016–2017 BBC America TV series, which was set in Seattle (first season) and a fictional Montana town.