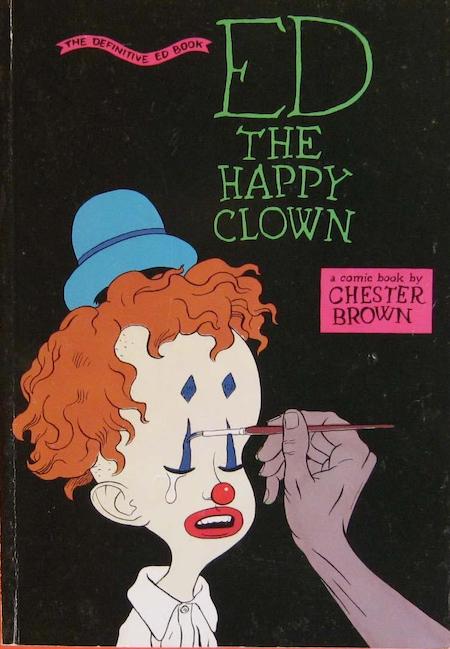 Chet, a janitor, loses his hand. Ed the Happy Clown, having just been punched in the face by a punk rocker, finds the hand under his pillow; he’s arrested, and his head is shaved. A man who can’t stop defecating causes the jail to burst open, and Ed escapes. Chet’s religious mania leads him to murder his sexy lover, Josie; Ed is beaten up by the punk, again, and abandoned in the woods… near Josie’s body. Ooga-booga-speaking pygmies, who live in the sewer system, retrieve both bodies (for food), at which point they discover that the tip of Ed’s penis has been replaced by the head of Ronald Reagan. As they prepared to sever Ed’s penis, Josie comes back from the dead and rescues him; via a flashback, we learn that she has become a vampire! Back in Dimension X, it turns out that scientists have been pouring fecal matter through a dimensional hole… which, as we know, led to the shitting man’s asshole. But then (their) Reagan falls into the fecal matter, which is how his head ends up on Ed’s penis. Ed and Josie escape from a laboratory and take it on the lam…. A bizarre, hilarious, vile adventure.

Fun facts: Ed the Happy Clown began in 1982, as an experiment in spontaneous creation; there was no script.In 1983, Brown began self-publishing the strip in his Yummy Fur minicomic. In 1986–1987, Vortex comics reprinted the seven issues of Yummy Fur, at which point Brown began to think of Ed the Happy Clown as a graphic novel. Drawn & Quarterly published a definitive, annotated edition in 2012.