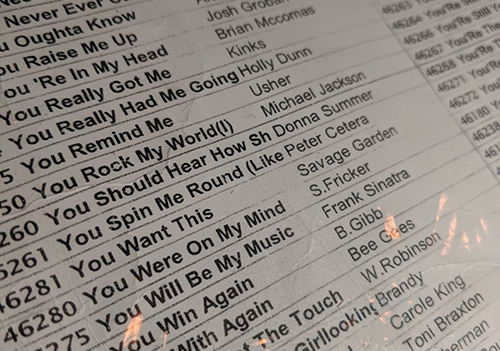 It is unclear how a piece of paper this old could have the word “Beyoncé” printed on it. The page is yellowed and crumpled, bent and faded. The top edge looks burnt. It is something that has seen constant use for more decades than the singer has been alive, let alone performed professionally, or, in the case of this piece of paper, recorded music. The page is a register, a ledger, a list of songs from a tidy little karaoke bar across town.

We had wandered in after dinner. One of my friends apparently knows the host, who has worked here for three dozen years — roughly, I note, since just a few years after Beyoncé was born. This timing later occurs to me as curious.

The page is one of many in a narrow, black binder. Each sheet is held in a thin plastic sleeve. We commence looking for a song. None of us intend to sing, but the binder is a compulsory magnet, like a TV playing sports headlines on a restaurant wall, or a couple arguing in a convenience store, or a fender bender on the side of the road: You can’t look away. You, in fact, slow down to observe. You can’t break away. You’re absorbed.

Looking for the song in question — which song doesn’t matter — makes us realize that our brains have begun to hurt. Spending time with these documents has initiated some sort of painful demagnetization. To look for the song is to suppose some organization on the page. The documents imply alphabetization, and when that strategy seems to fail us, we assume the pages are out of order. But that’s not it, either. Within each page, the amassed listings reveal a mishmash of small groups, groups that make sense until a sudden shift occurs with the appearance of a stray song.

The documents look like an Excel spreadsheet, and this produces an additional sense of frustration: If only I could tap at the top of one of these columns and reorganize the way the data is presented. If I could do that, maybe order would be restored. One of my friends takes a more analog approach, asking the proprietor if there is another binder, organized by artist. For the first and only time this evening, we are looked at with something other than a friendly smile. “No,” we are told, and that is all. We have tread on a sore subject.

We return to the page, half expecting it to have changed while we had looked away. Upon closer inspection, the list of songs unravels further, and our brains along with it. Peter Cetera, best known as the singer of the pop band Chicago, didn’t do a version of “You Spin Me Round (Like a Record),” no matter what this document says. It was a Dead or Alive hit. 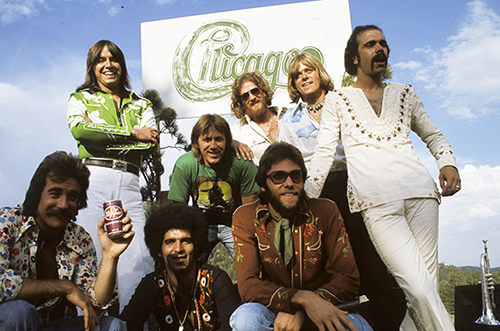 That’s right, right? We resort to our phones — we check, half expecting to have no reception inside the bar — to reconcile our pop-culture memories with some third-party source of truth. I’m stuck on the way the song appears on the page, where you can read straight across the line: “You Spin Me Round (Like Peter Cetera.” The lack of a close parenthesis fills me with sudden, palpable, and utterly unfamiliar fear. What if this experience never ends. We have been turned around. What if, like Peter Cetera, we have stumbled into another realm.

The bar’s one television has been quietly but not silently running uniformly wan karaoke videos all evening. At some point the opposite of karaoke music streams from the TV: all vocal, no backing track, and yet equally bland as the soft-focus nature footage and crying young women who populated the previous videos. What is the point of this particular track? Who sings karaoke along with a prerecorded singer?

I then briefly wonder: What if all karaoke-bar music is streaming from an alternate universe, a universe where compressed, largely vocal-free, synthesizer-driven versions are the original hits. What if karaoke bars are crosstime saloons where our respective, independent universes touch. What if the factual and alphabetical fissures in the spreadsheet aren’t errors so much as rifts, rifts initiated when time travelers have unintentionally triggered forks in the very fabric of reality?

We’re asked if we want another round of drinks. We politely decline. The steady flow of free peanuts and pistachios begins to dry up. We take the hint. We pay up and head out into the night, back into our reality. We glance simultaneously at our phones, as if they would register, right alongside the date and time, that we’ve returned to our sliver of the multiverse: 9:34pm, February 7, Earth Prime. We sniff the air and look around. The music of the bar’s TV is inaudible from the street.