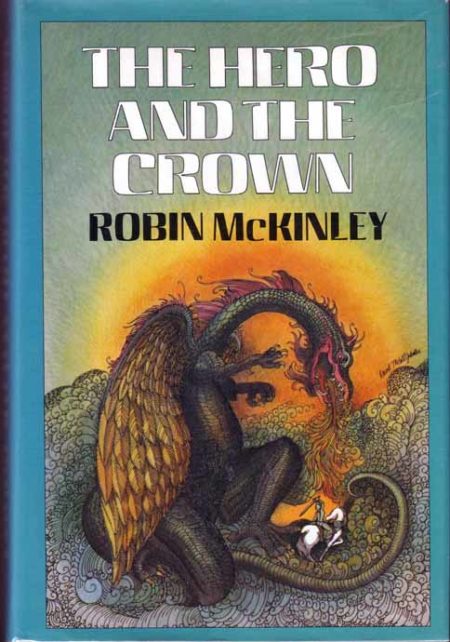 Robin McKinley’s Damar YA fantasy adventure The Hero and the Crown.

Aerin, heroine of this prequel to The Blue Sword (1982), isn’t your usual princess. She’s considered ugly — because she’s tall, awkward, fair-skinned, redheaded; other inhabitants of Damar, a remote region of an empire called Homeland, are bronzed and black-haired. Worse, she is the only young member of the royal family whose magical Gift has never manifested. Still, her cousin Tor — who is heir to the throne — is in love with her, though she doesn’t realize it. She trains herself, secretly and stubbornly, to become a warrior; and she develops a balm that protects its user against flame — which will come in handy when she heads out, on her lame but trusty steed Talat, to kill a few of the minor dragons who’ve infested Damar. Left behind when Damar’s armed forces march to battle against their Northern neighbors, Aerin must deal with a great dragon, the dread Maur. Meanwhile, her dreams are haunted by Luthe, the pale-skinned mage of the mountains, the Edward to Tor’s Jacob. Whom will she choose?