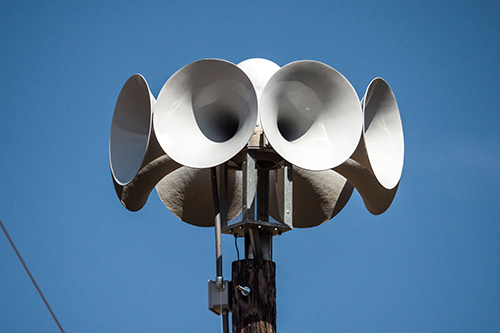 Today as noon approached, I left home and walked to the bus stop. The downtown bus wasn’t due to arrive for another 10 minutes or so, but rather than linger indoors, I stood outside and waited for not just the bus but the hour to arrive. I waited for the confirmation that, indeed, at noon, nothing would be heard. Not nothing, mind you, just not the something that has rung out every Tuesday at noon for years.

That something is the unique one-two punch of the Outdoor Public Warning System here in San Francisco. First comes the siren itself, and then the announcement, like something out of a Godzilla movie: “This is a test, this is only a test,” and so forth. Well, not “comes.” Came. Came, past tense. The OPWS is on hiatus for two years. Last Tuesday, December 10, it rang out one final time, across nearly 120 speakers spread around the city, and then was turned off. The whole system is being updated, and until that work is complete, the siren will be mute.

A “mute siren” sounds like some tragic story out of mythology, and there is indeed something monumental to the siren’s presence, and something fable-like to its combination of ubiquity and transparency. The massive speakers that exist solely to emit its signal hide in plain sight. The sound itself often goes unnoticed. I regularly meet people who have lived in San Francisco for months, even years, and who never knew the siren rang out. Once they hear it, of course, they know it’s there, and in that instant they join a community of listeners. Subsequently, they listen for the OPWS each Tuesday, and they are conscious of missing it when they happen to be indoors, or underground, or out of town at the appointed time.

You can hear what it sounds like in this recording I made back in 2013. Note the suggestion of an echo, which is in fact the presence of multiple speakers heard at varying distances:

For the next two years we’ll all miss what can be termed a true “soundmark” of San Francisco. R. Murray Schafer, the acoustic ecologist and composer, defines the “soundmark” as “a community sound which is unique or possesses qualities which make it specially regarded.” Other regional soundmarks will abound, from the deep drones of foghorns on the bay to the rattle of the cable cars. We’ll have to see what we make of the OPWS when it returns. Will it sound the same? Will it continue to be offered, in some neighborhoods, in both Cantonese and Spanish? Will its eventual return feel like a rupture, given its extended absence? Or will it again settle into the city’s soundscape (a better-known term of Schafer’s), pervasive and hushed, insistent and invisible, threatening and comforting.