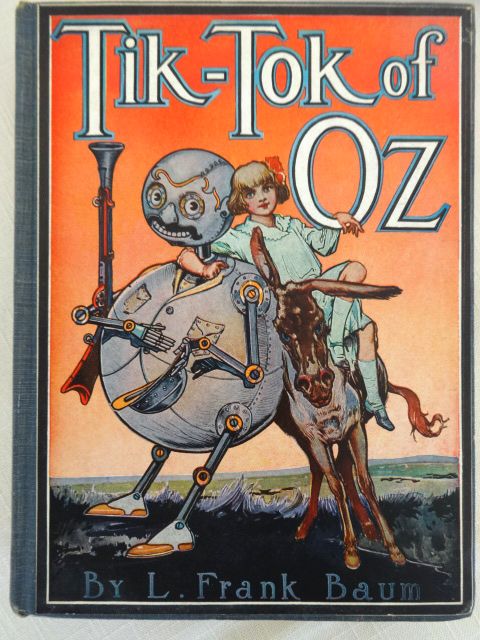 Tik-Tok, a “Patent Double-Action, Extra-Responsive, Thought-Creating, Perfect-Talking Mechanical Man Fitted with out Special Clock-Work Attachment,” made his début in Ozma of Oz (1907). In the eighth Oz book, the plot of which Baum based on his 1913 play of the same title, Tik-Tok joins an anti-Nome King strike force composed of the principled hobo Shaggy Man and the cloud fairy Polychrome, both of whom first appeared in 1909’s The Road to Oz; the newly plucked Rose Princess Ozga, a cousin of Ozma’s; the small army of Queen Ann Soforth of Oogaboo; and Betsy Bobbin and her mule Hank — a last-minute substitute for the characters Dorothy Gale and Toto, who were contractually unavailable to Baum for theatrical purposes. When the Nome King sends this ragtag army through his Hollow Tube to the jurisdiction of Tittiti-Hoochoo, the powerful jinjin sends them right back again with an Instrument of Vengeance: Quox, a less-than-impressive dragon. The battle is on! Will the Shaggy Man find his missing brother — and if so, can he free him from the Nome King’s spell?

Fun facts: The endpapers of the first edition of Tik-Tok of Oz feature the first maps printed of Oz and its neighboring countries. Unfortunately, the map of Oz was drawn backwards, which has caused confusion ever since.