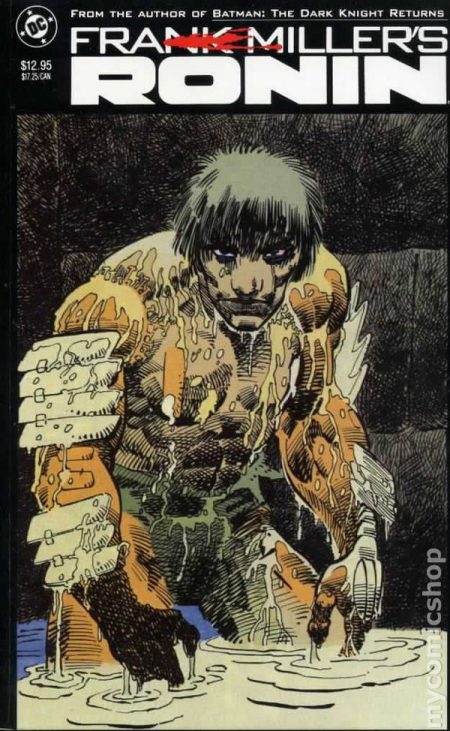 A six-issue DC miniseries written and drawn by Miller, who a couple of years earlier had earned a brilliant reputation as a writer and penciller on Daredevil. While researching martial-arts movies and Japanese samurai manga for that comic, Miller became fascinated with the medieval figure of the ronin — a rootless samurai whose master has been killed. Drawn in a weird, expressionistic style synthesizing manga and Moebius, Miller’s Rōnin tells the story of Billy Challas, a limbless and abused mutant with telekinetic powers who — while testing cutting-edge prosthetic limbs for the biocircuitry company Aquarius, located in a post-apocalyptic New York — appears to be possessed by a ronin from feudal Japan. Virgo, the artificial intelligence at the heart of the Aquarius Complex, is a major character in this enthralling, often wordless yarn; other players include Peter McKenna, inventor of biocircuitry, his wife, Casey McKenna, Aquarius’ bad-ass head of security, and Taggart, who funded and controls Aquarius (and who is replaced by the ronin’s almost-immortal enemy, the demon Agat). The action spills out into the streets of New York — where Billy/Ronin must confront a neo-Nazi gang, sewer-dwelling cannibals, and Virgo’s lethal robots!

Fun facts: Artwork painted by Lynn Varley. Genndy Tartakovsky has stated that Ronin was one of the major influences on his animated TV series Samurai Jack.