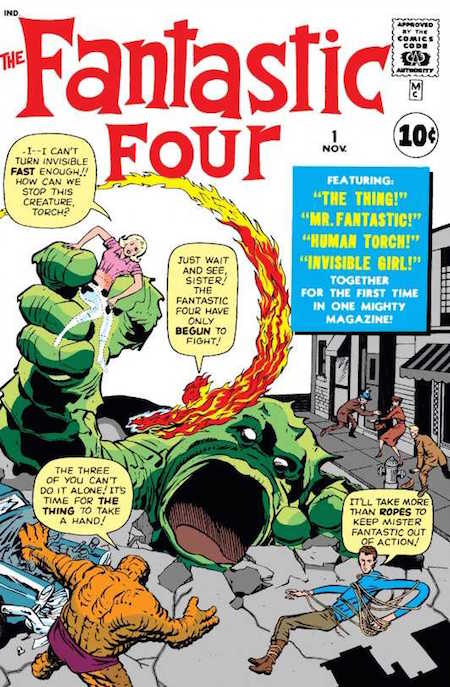 The so-called Marvel Age of comics began in November 1961, with the publication of Marvel’s first superhero team title, The Fantastic Four. Just a few months after Yuri Gagarin’s pioneering spaceflight, Stan Lee and Jack Kirby dreamed up a team of unofficial astronauts — genius scientist Reed Richards, siblings Sue and Johnny Storm, and pilot Ben Grimm — who sneak into space in a rocket of Richards’s own design. Bombarded by cosmic rays, the quarrelsome crew are transformed: Sue can turn invisible, Ben’s body is scaly and powerful, Johnny can burst into flame and fly, Reed can stretch himself into any shape. In their first outing, the Fantastic Four jet to Monster Isle, the source of subterranean attacks on atomic plants around the world. There, they discover that the Mole Man, who seeks revenge on humankind for having ridiculed him, plans to invade the surface world with an army of monsters!

Fun fact: Lee and Kirby upended the superhero conventions of previous eras by eschewing secret identities, and allowing their characters to have real-life problems and interpersonal conflicts. In the first few issues of Fantastic Four (the “The” was dropped in July 1963), the team doesn’t even wear uniforms.