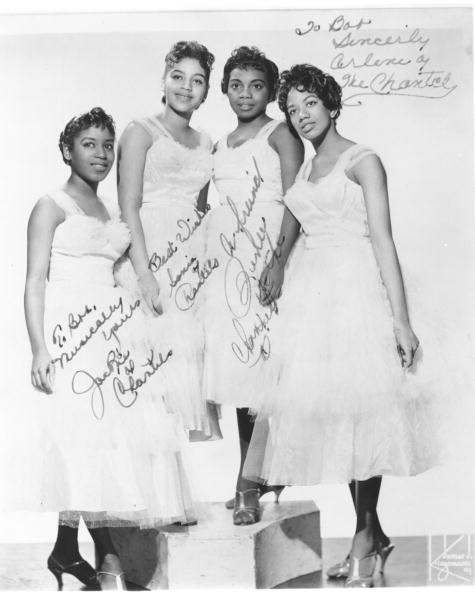 The Chantels don’t exist. They never existed; they cannot exist. The Chantels were a group of teenage girls from the Bronx who named themselves after a Catholic school and made their records in a studio that had been a church. The Chantels are all high, keening echo; their lead singer, ARLENE SMITH (born 1941), is all cry. Echo answers cry across cathedral wood and stained glass, watched in awe by immobile saints and a bleeding Christ. The story is told that the Chantels’ producer, George Goldner, terrorized Arlene, belittled and berated her, to make her realize that hers was the greatest voice in the world. He made her weep, cower, and shake, all to get the fear into her voice and her heartbreak onto the tape. Not that that story accounts for the records they made. No theory of psychology or logic of emotional extortion gets behind the hurt of Arlene Smith, the rapture that goes beyond joy so that it returns again to hurt, the first hurt — the hurt of being alive, the hurt that makes every feeling, even joy, a shade of pain.

“Maybe” (1958) could be the greatest romantic agony ever felt. It squeezes the breath from your chest, the sorrow from your throat. Your eyes go blind — or see nothing you can describe. Listen to them, look at them, think about them. Think about what I mean when I say the Chantels don’t exist, never existed, cannot exist.

On his or her birthday, HiLobrow irregularly pays tribute to one of our high-, low-, no-, or hilobrow heroes. Also born this date: Edward P. Jones, Flann O’Brien, Bill Dixon.