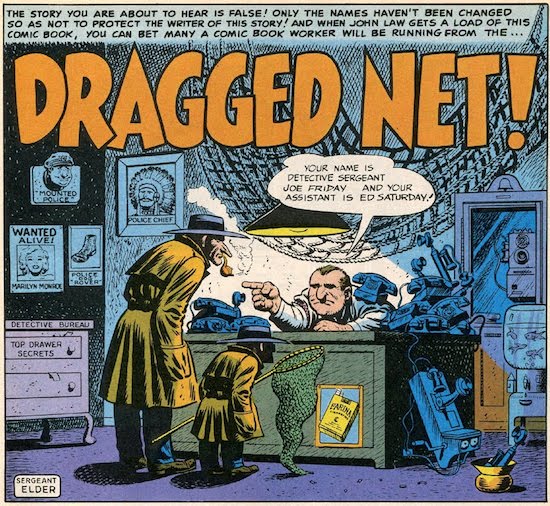 Illustrator and comic book artist WILL ELDER (Wolf William Eisenberg, 1921–2008) was the most important early contributor to the satirical comic book/humor magazine Mad, which his high school chum Harvey Kurtzman founded (with William Gaines) in 1952. Elder’s panels for various Mad strips — and for the long-running Little Annie Fanny strip, which he and Kurtzman would create for Playboy in 1962 — remind us of art critic Mario Praz’s expression “horror vacui,” i.e., the cluttering-up of an artwork with extraneous detail. But in Elder’s case the cramming-in of innumerable jokes, an effect that he called “chicken fat,” was done for laughs. Take, for example, the panel above — a splash page for Elder’s May 1954 parody of the earnest crime TV show Dragnet. Here we find, among other things: a detective bureau that is an actual bureau; a water cooler aquarium; a Native American “chief” of police; and, looming large above it all (hence invisible), a fisherman’s net, the “dragged net” of the title. For young members of the Anti-Anti-Utopian and Blank Generations, Elder’s razor wit provided an antidote to the treacle served up by Disney and Disney-esque comic book publishers. Like Hogarth or Bruegel the Elder (see, he’s kin!), Elder’s satire was antic and savagely satirical. He skewered midcentury America’s sensibilities, exploded the fourth wall, and transmuted Barthes-like semiotic insights into comic schtick.

On his or her birthday, HiLobrow irregularly pays tribute to one of our high-, low-, no-, or hilobrow heroes. Also born this date: Joseph Valachi, Nick Cave, Joan Jett.