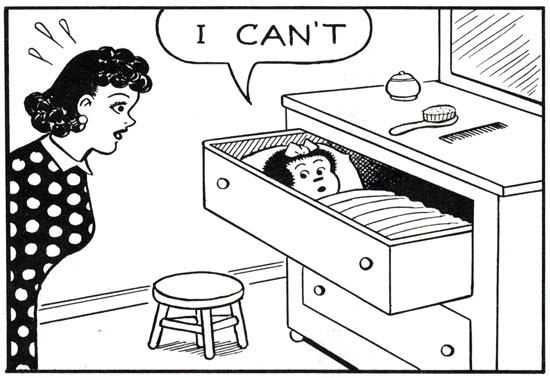 Imagine R. Crumb’s cartooning invaded by the ghost of Euclid of Alexandria and you begin to glean the essence of ERNIE BUSHMILLER’s (1905–82) comic strip Nancy, which he wrote and drew for nearly 50 years. Bushmiller’s lines are deceptively simple — clean, geometric. As a kid growing up reading the funny papers in Texas, I found Bushmiller’s gags childish — I much preferred Peanuts, Blondie, and Gus Arriola’s Gordo. It wasn’t until I’d grown up that I was finally able to read Bushmiller’s simplicity — which bears comparison to Beckett’s deft touches, Mondrian’s stripped-down aesthetic — as a deeply sophisticated approach to cartooning. From this perspective, we must understand Bushmiller’s frequent pokes at abstract modernist art as a kind of camouflage, obscuring what he himself was doing: i.e., pantomiming the era’s semiotic wars of signifier vs. signified via the antics of a homely little girl and her sidekicks.

On his or her birthday, HiLobrow irregularly pays tribute to one of our high-, low-, no-, or hilobrow heroes. Also born this date: Paul Otlet, Clifford Geertz, Allan Kaprow.