Regression Toward the Zine (14)

PREVIOUSLY: The zines Rollerderby and Scram from the Joshua Glenn Zine Collection. 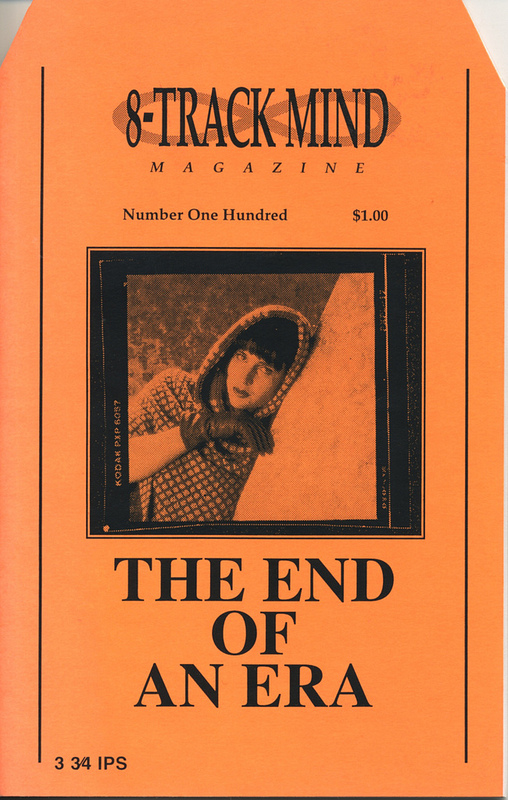 8-TM was published out of Chicago by Russ Forster and an international posses of 8-track tape enthusiasts. Their credo, or rather, their “8 Noble Truths”:

1) State of the art is in the eye of the beholder.

2) Society’s drive is on attaining rather than experiencing.

3) In less than optimum circumstances, creativity becomes all the more important.

4) Progress is too often promises, promises to get you to buy, buy.

7) In seeking perfection has the obvious been overlooked?

8) Innovation alone will not replace beauty.

When eBay came along, the fun went out of collecting 8-tracks — and the zine folded. 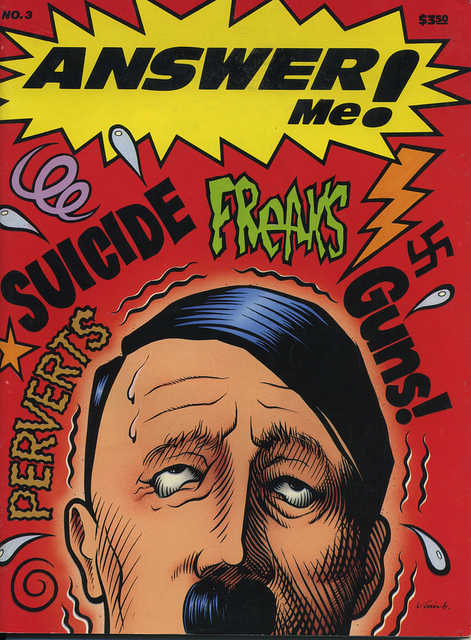 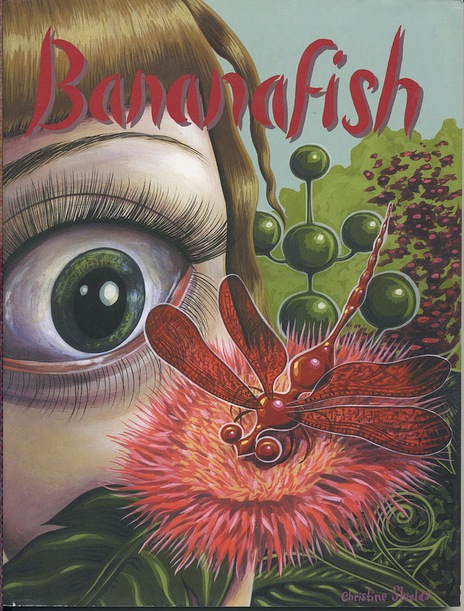 Bananafish was published out of San Francisco by someone whose moniker — like that of his/her zine — was inspired by J.D. Salinger. Seymour Glass’s absurdist zine (or magazine — it was somewhere in-between) was a hodgepodge of everything from reviews of noise music to found art. Each issue included a compilation 7″. 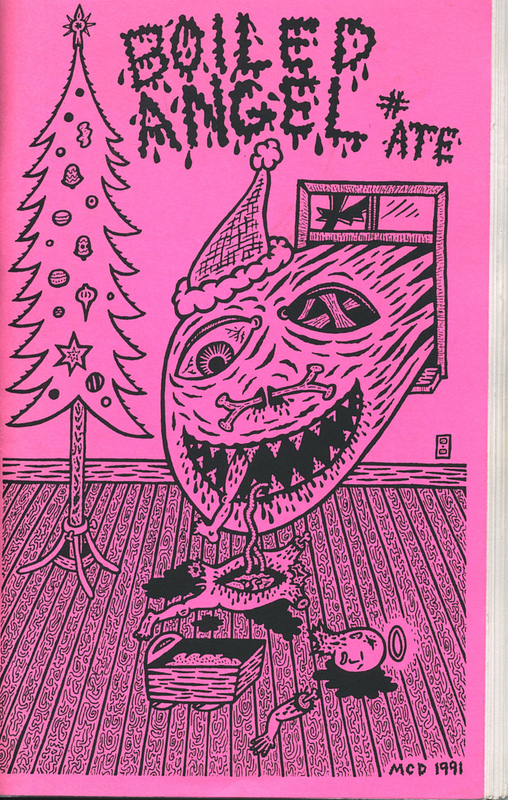 Mike Diana is an underground cartoonist who became the first artist ever to receive a criminal conviction for obscenity for artwork in the United States. His zine Boiled Angel — in which cannibalism, torture, rape, bestiality, mutilation, and murder made frequent appearances — landed him in trouble with the police in his home state of Florida. His trial became a civil liberties cause célèbre. 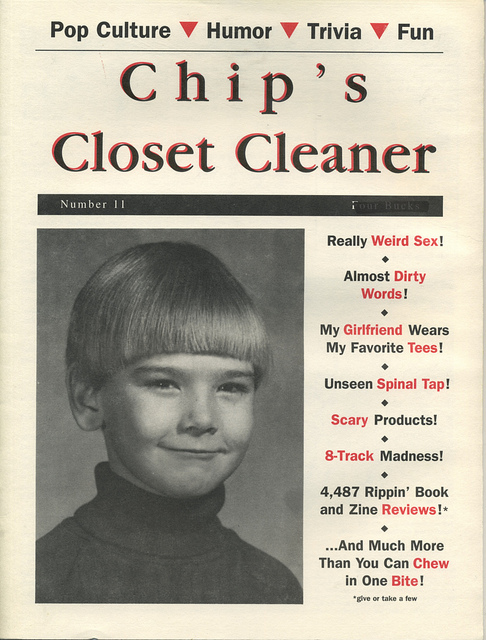 Chip Rowe’s zine Chip’s Closet Cleaner was exactly what it sounds like — stuff from Rowe’s closet, or desk drawers, or file cabinet.

Chip went on to work at Playboy for nearly 18 years; he published an amazing Spinal Tap fanzine; and he edited the 1997 book The Book of Zines, which excerpted 80+ of his favorite zines — including Beer Frame, Murder Can Be Fun, and Rollerderby and many more. His succinct introduction to that book is well worth reading. Excerpt: “Zines are cut-and-paste, ‘sorry this is late,’ self-published magazines reproduced at Kinko’s or on the sly at work and distributed through mail order and word of mouth. They touch on sex, music, politics, television, movies, work, food, whatever. They’re Tinkertoys for malcontents. They’re obsessed with obsession. They’re extraordinary and ordinary. They’re about strangeness but since it’s usually happening somewhere else you’re kind of relieved.” 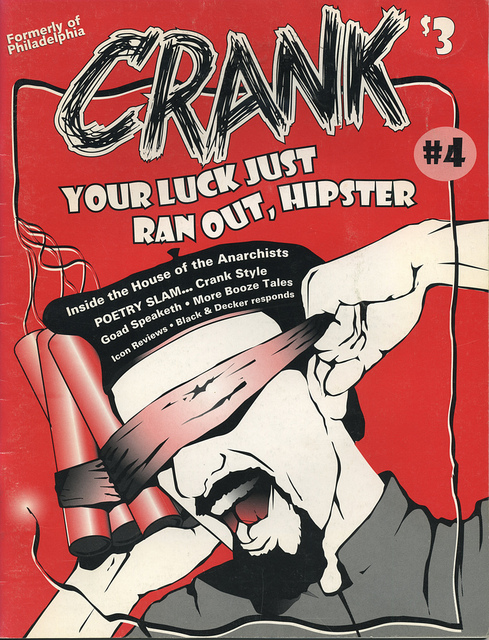 Crank was a zine published from 1994–2000, in Philadelphia and New York, by Jeff Koyen. (Archive here.) Koyen’s tutorial on drunk driving was eye-opening; the whole idea of locking your arm in place — who knew? He went on to be the editor of New York Press during that alternaweekly’s offensive, funny heyday. He quit—rather than being forced to apologize—after publishing a story by Matt Taibbi titled “52 Funniest Things About the Upcoming Death of the Pope.”

PS: N+1’s book What Was The Hipster? claims that “when we talk about the contemporary hipster, we’re talking about a subcultural figure who emerged by 1999.” The cover of Crank #4 (1993–94) shown here demonstrates that N+1 was off by half a decade. Hipsters had not only emerged by 1993–94, but some people already hated them. 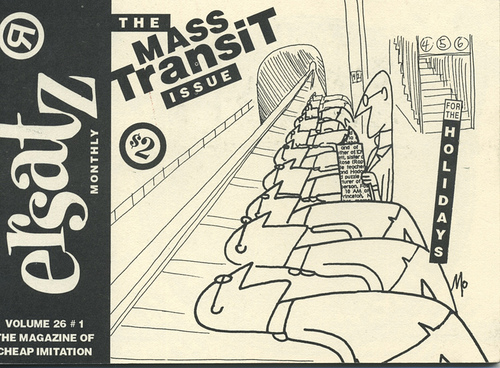 Ersatz, which billed itself as “the magazine of cheap imitation,” was published by Sam Pratt. It was gorgeous! Contributor Mo Willems went on to become a Caldecott-winning children’s book author. Contributor Chris Weitz is one half of the Weitz brothers, who’ve brought us the movies American Pie, About a Boy, and The Golden Compass. Contributor Jesse Sheidlower became a big-wig editor at the Oxford English Dictionary. 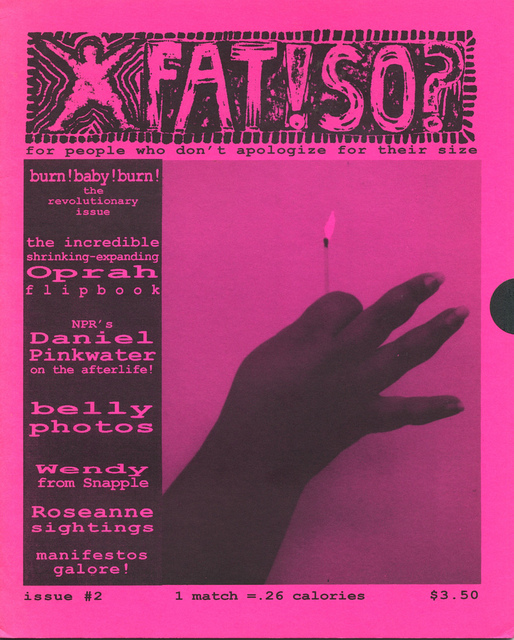 This smart, angry, funny zine was published by Fat Acceptance Movement activist Marilyn Wann. The zine became a book and a website. 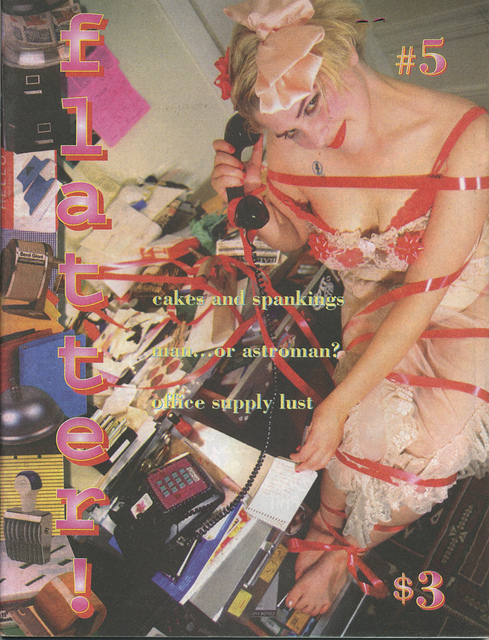 The zine Flatter! was published by office supply fetishist Jaina Bee Davis, who was inspired by Lisa Carver’s Rollerderby. From what I can tell, she’s still publishing zines now!