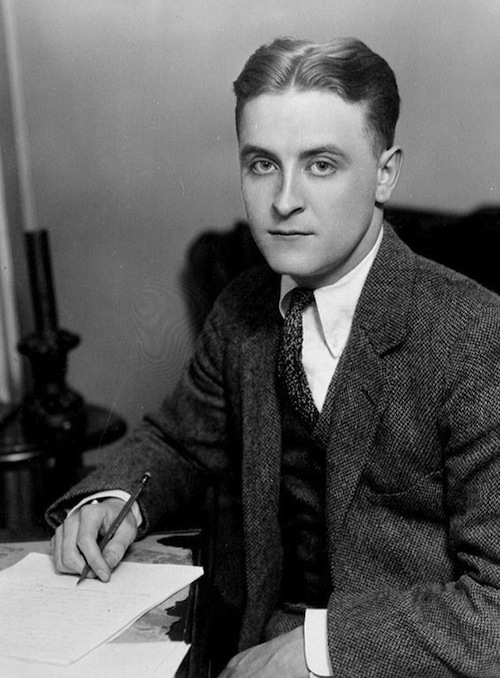 Characters with no repose go to live in F. SCOTT FITZGERALD (1896–1940) stories. They skitter or flourish or fall. The view is from before you make it to the other side of crisis. Roaring twenties Americans trying not to be. Thoughts from minds that know WWI was just a warm-up. Existential fidgeting as wallpaper…

Things looked black for them — not a man had come into the restaurant for ten minutes without raising his hand to his face.
“We ought never to have given up waxed mustaches,” said Abe. “Nevertheless Dick isn’t the ONLY man with repose —”
“Oh, yes, I am.”
“— but he may be the only sober man with repose.”

Fitz broke with chauvinists of the dark-hurt-and-drink bunch in Esquire’s 1936 serial “The Crack-Up.” It pissed off deacons Hemingway and Dos Passos. Whether or not a herald of the confession aesthetic, Fitzgerald drank enough to make feigning tuberculosis a good idea. The patron quote of the panic attack from the Esquire trilogy: “The test of a first-rate intelligence is the ability to hold two opposing ideas in mind at the same time and still retain the ability to function.” The trick is to open a valve to risk, joy or love enough to be able have that cocktail, not get carried away with an impractical affair and to avoid the crumbling rush if cracks form. Tender is the Night is greater than Gatsby. It’s splendid. But the indulgence isn’t free. Analysis is an anvil. Everyone’s fair game, particularly Fitzgerald himself.

On his or her birthday, HiLobrow irregularly pays tribute to one of our high-, low-, no-, or hilobrow heroes. Also born this date: John Brunner.