Regression Toward the Zine (10) 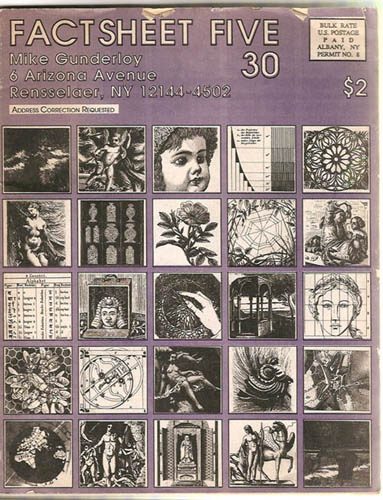 Excerpt from “Zines: Where the Action Is: The Very Small Press in America,” an essay by Factsheet Five publisher Mike Gunderloy published in 1990 (in Whole Earth Review).

I know a place where you can find out about the art of writing renga. A place where people discuss the merits of Japanese monster movies. A place where the preservation of cave fish is more important than housing developments. One where men grapple with feminism and what it means to their lives – and where women can be alone for a moment without the presence of men. One where new languages are being invented and learned even as you read this. One where workers, from old-line unionists to new burger-flippers, talk about work in their own words. One where the battle over where to hold science-fiction conventions is a matter of the gravest importance. One where millions of facts, near-facts, rumors, suspicions and downright lies are available to anyone who cares to look for them. The place? It’s the very small press.

I’m excited about the very small press, whether you call it the underground press, the alternative press, or simply “zines” (short for “fanzines” a contraction of “fan magazines” which originated with lovers of science fiction). I don’t mean, for the most part, things like Whole Earth Review. On the scale I’m considering, Whole Earth Review is a megazine, so large as to be almost frightening. No, what I’m excited about are publications like Gray Matter, Flipside, Greed, Yellow Silk, Kick It Over, Sign of the Times, Union of Opposites, Philly Zine, Ju’i Lobypli, Quimby, and The Kvinde Hader Klub: things with a circulation in the thousands, the hundreds, and sometimes only in the tens. This is where the action is, where information (and disinformation) is free, where things are happening.

Of course, when you’re immersed in a sea of hammers, it’s sometimes difficult to remember that not everyone wants to drive nails all the time. I’ve been collecting the very small press since about 1977, seriously so since 1982 when I started publishing Factsheet Five. In mid-1990, I don’t have an exact count except in archivist’s terms: about 150 linear feet of files (with close to another foot coming in each week). As near as I can figure, that amounts to about 25,000 separate issues of some 10,000 titles. And at best, I’m only getting about 10 percent of what gets published in the United States alone – not even thinking about the rest of the world.

These figures are a bit less impressive when you think about the people at the other end of the information pipeline: the readers. Out of those 10,000 zines, only a few hundred have ever had a circulation over 1,000. Of these at least half have gone out of business — the half-life of a zine is on the order of two years (that is, two years from now half the current zines will be out of business). Even when they don’t go bankrupt, editors on this scale tend to move on to other things as their interests change. Since for most of us there is no fortune and darned little fame to be made from publishing a zine, this is quite understandable. All in all, there are at most a couple of million people who read any of these things, and only a handful of hardcore zine junkies who, like myself, read lots of them.

So then why am I excited? Because these people, the few thousand publishers and the few million readers, are the ones at the cutting edge of social change. Even when they think they’re just writing or reading about punk music, kite-flying, the revival of Asatru, or new sculpture, these people are part of A Phenomenon. Our industrial society has finally brought things to the point where almost anyone can own the means of production of a zine. Cheap photocopiers, cheap computers and (if you don’t believe me, look at other countries) cheap postage have combined to bring the opportunity cost of publishing way down. And presented with the means to say things, people have found things to say. Better yet, they’ve discovered that other people will listen. And so a groundswell of publishers is appearing, people who realize that people can get things done, without the help of the major organizations which we tend to assume run society. The key word, for me, is gumption. That’s what these publishers have and that’s what we need more of if the 21st century is not to begin as a sorry mess. The people who work the hardest (and the smartest) in the coming decade will be the ones who define the future for all of us.

Also from 1990: Angry Thoreauan, a large and well-produced Los Angeles zine — punk-oriented, though not a fanzine — published by Rev. Randall Tin-Ear. The title was a good joke, if you knew about the Los Angeles punk band The Angry Samoans. Shown below, from my collection: issue 26. 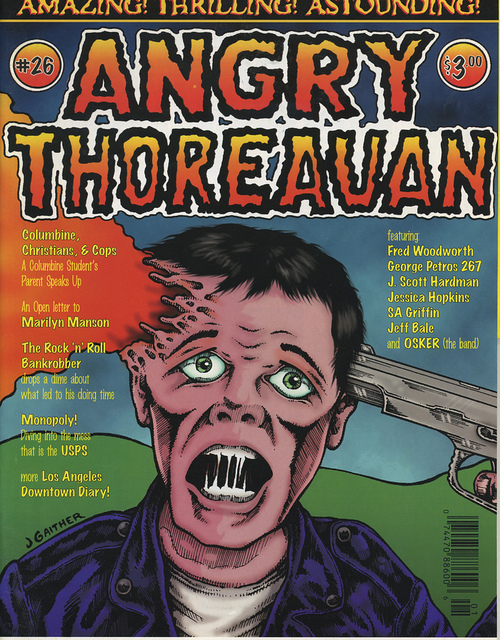 *
NEXT: The secret origin of Luvboat Earth