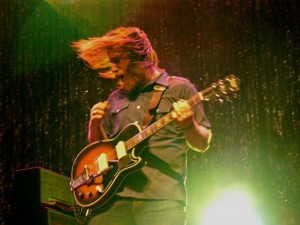 Although guitar-driven rock’s incursions into the world of popular music are regular, widespread embrace of guitar virtuosity is a rarer thing. Akron, Ohio’s DAN AUERBACH (born 1979) is one of only a handful of his generation who have the talent and inclination to make the guitar wail and lament, growl, chirp, buzz and cry. In his most fertile mode as one half of The Black Keys (along with feral drummer Patrick Carney), Auerbach uses his right thumb to carve out the grooves usually handled by the bass guitar, his forefingers ripping out piercing melodies while he sings soulful and hook-filled blues in a display of multi-tasking that one watches live in a state of disbelief. If he can’t create enough variety in color and dynamics with the subtlety of his finger-picking and strumming, his liquidy left hand, or deft touch with the tremolo arm, he has an army of effects pedals to increase his palette. Auerbach’s ear is phenomenal; you can hear his thumb slide across the strings, the variance in the sonic attack between his plucked runs and those done with only his left hand. Few bands seem to care about dynamics anymore, but Auerbach makes his guitar whisper. Over time his compositions have become more hooky, the dynamics, range and style resemble rock music more, and he and Carney have added extra musicians onstage. But they haven’t gone Hollywood yet. Auerbach’s guitar tech is the owner of the shop in Akron where he first had his guitars set up, his strings are manufactured by an Akron shop, he and Carney are strong supporters of Ohio musicians. Let’s hope this guitar sufi doesn’t lose his religion.

On his or her birthday, HiLobrow irregularly pays tribute to one of our high-, low-, no-, or hilobrow heroes. Also born this date: Wim Mertens, Edward Ricketts, George Lucas.