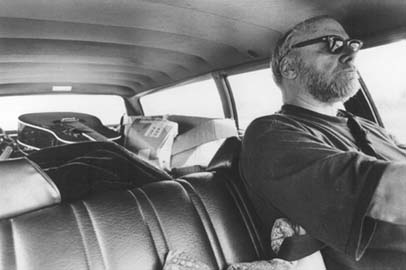 The paradox of JOHN FAHEY’s (1939–2001) rich and resonant guitar music is that it seems to flow straight out of the Big Muddy of American music even as the man himself dodged, every step of the way, the briar patch of folk authenticity. A maverick traditionalist from the get-go, Fahey was already collecting blues and old-timey 78s and reverse-engineering picking patterns by the mid-1950s. But unlike many in the dawning folk revival, he never saw the music he both studied and transformed as a site to claim (or commercialize) identity. Too much has been said about Dylan’s game of masks, but young Bob’s first persona, with the Guthrie cap and the lame drawl, cannot hold a mojo hand to the mythical bluesman Blind Joe Death, to whom Fahey attributed one half of his first, independently recorded and distributed 1959 LP. Fahey kept the gag going for years, but do not mistake Blind Joe for blackface: besides being a gesture of Fahey’s dry beatnik Dada (read some of Fahey’s early liner notes for more of this), the avatar was also an acknowledgement, by a white guy who knew the score, that loving, analyzing, and appropriating the music of poor black guys is like being a blind man at a heavy duty séance. (It is not for nothing that Fahey named his last great record label Revenant Records.) Such ghosts do not authenticate — they instigate, they impel.

And it is easy to forget how much Fahey himself instigated. His sweet déjà vu melodies, the rustic edge of his phenomenal chops, the big-hearted drive of his picking — all these seem so familiar, so always already part of the weave of America’s crazy quilt, that they can obscure how much cantankerous avant-gardism and conceptual insight informed his simultaneous construction and creative elaboration of “American Primitive Guitar.” In Fahey’s hands, this “tradition” was always more Charles than Burl Ives (give a spin to “Old Southern Melody” and you’ll see what I mean), but it was precisely Fahey’s odd-ball moves — his woozy chromaticism, his electronica goofs, his shaggy-dog ragas — that enabled his music to paradoxically become a living current of creative memory and craft, one whose endless permutations have sustained legions of steel-string pickers — and other self-reliant and occasionally sentimental sumbitches — to this day.

On his or her birthday, HiLobrow irregularly pays tribute to one of our high-, low-, no-, or hilobrow heroes. Also born this date: Guy Maddin.