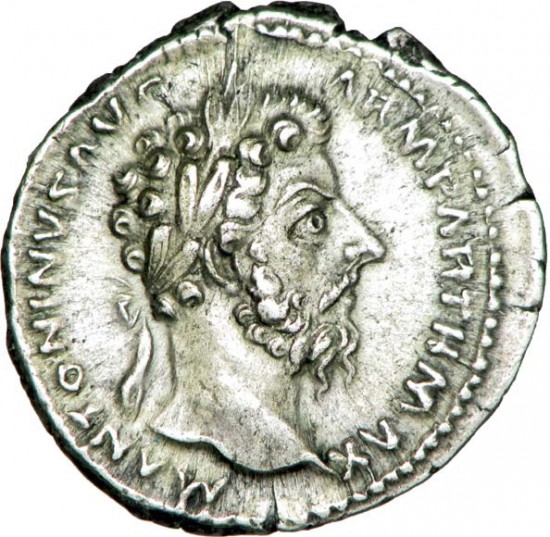 The last of Rome’s Five Good Emperors, MARCUS AURELIUS was born today in 121 A.D. We misnomer Aurelius’ notes to himself Meditations because they remind how to act right and focus in the face of meaninglessness. His are common thoughts, profound only in how rare common sense is. Aurelius wrote in Greek instead of his own Latin, returning his thoughts to their ancient source; Stoic ideas warmed him and became less his own as they shone universal. Forgive and be helpful because it’s better. Anger and paranoia are on you. We’re dust in the wind. (Look to Aurelius for more hippie rock lyrics than are in the Bible. New Testament authors, after all, were covering the same standards as he.) “How is my soul’s helmsman going about his task? For in that lies everything.” A soul is not an existential concern: You can’t see it, but you venerate it while moving forward. (Don’t you?) He knew we were built with a compass: “If it is not the right thing to do, never do it; if it is not the truth, never say it.” Less trippy and more pragmatic than Eastern, Aurelius reminds himself to keep to his work for the people, accept life on its own terms, and overlook intrigue. He returned to Nature via an infectious camp disease in 180. Salve! Magister Aurelius.

On his or her birthday, HiLobrow irregularly pays tribute to one of our high-, low-, no-, or hilobrow heroes. Also born this date: Ludwig Wittgenstein.