As I write this, in Los Angeles, a man has just been arrested for setting fire to 55 cars, throughout the city, over a four-day period. (If you want to really hurt people, especially out here, don’t kill ’em, torch their Prius.) Many of these attacks occurred near my neighborhood. The suspect’s motives are unclear at this point. Details are sketchy. 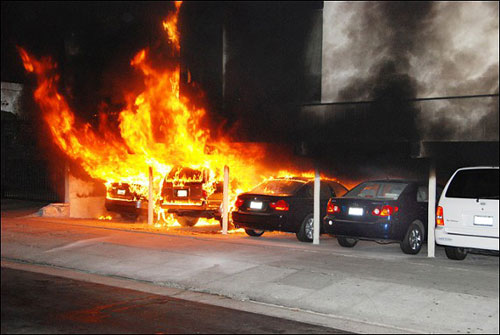 We’ll soon get the full story (it’ll be old news by the time anyone reads this): a precise timeline of his actions, a familiar portrait of a damaged psychology, his gaze in the official photo. But at this moment, at least from a storytelling perspective, is when things are most interesting. Because we know so little.

Did they get the right guy? Were these attacks personal? Politically motivated? If pushed hard enough, could I do something like that?

There are gaps. Ellipses. You enter the space full of questions. The psyche is on edge. And if we’re willing to admit it, that’s where the fun is. Because the missing rungs in the ladder invite us to reach and reflect. Maybe on ourselves. 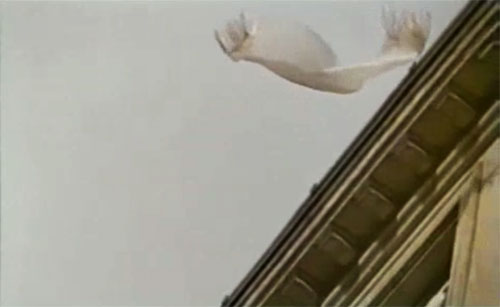 In Bresson’s Une Femme Douce, a woman commits suicide by leaping from the roof of an apartment building. For most of the sequence, we never see her body. The chair she leapt from topples over, knocking down a flowerpot. There is the sound of screeching brakes in the street below, then a cut to her white scarf, floating gently down from the rooftop. It’s riveting. And deeply felt. We rush to fill the space made by her absence.

Increasing mystery by subtraction. In language (and image). It’s one of the things art, certainly theater and film, does best. It’s in Beckett. Tarkovsky. Kafka. Bresson. Sara Kane’s plays. The Old Testament. And Thom Yorke’s lyrics.

Last week two well-dressed, elderly men walked past me. I heard one say to the other: “It’s a fuck you situation.” And they were gone.

Was he talking about his failed marriage? A business deal gone bad? His wife and children who no longer speak to him? When have we felt such a hopeless sense of conflict in our own life?

Chris Rossi is a writer, director and actor. He will be making his feature film directing debut this spring in LA with “Lives of The Saints.” The script, which he also wrote, was selected into Film Independent’s Screenwriters, Directors and Producers Labs, as well as the No Borders film market in New York. He has also developed both film and television scripts with a number of top Hollywood producers. His action-horror script “Day38,” which he co-wrote, was optioned by McG’s Wonderland Sound and Vision. Chris is also a nationally known voice actor whose work can be heard on TV and Radio. As a playwright, he is a member of John Steppling’s Gunfighter Nation collective, where he developed his play “Verge.” His latest play, “Bethesda,” a dark drama about an Arab female journalist and her interrogator, premiered in a reading in Los Angeles on Jan 6th of this year, and was excerpted in HiLobrow.