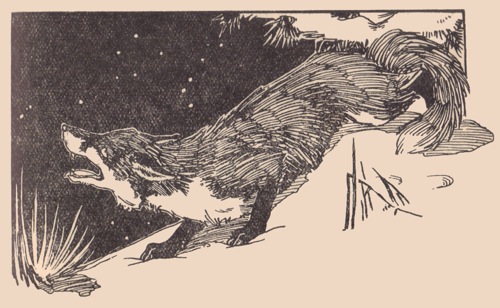 NOTE TO THE READER: Herewith an extract from the memory tables of Cocky the Fox, erstwhile and eventual Prince of the Borough, presented as an addition to the canon in full cognizance of the likelihood that events recounted here may appear pseudepigraphical, apocryphal, or paradoxical with respect to the golden thread of The Ballad of Cocky the Fox as such. Such are the wiles of the vulpine Mnemosyne — may they yield hours of joyous toil for generations of cockologists, cockographers, and cocktometrists to come. — Eds.

COCKY VS JACKPOT, WATCHED BY THE RAVENS

Thoroughly jarred by the badger-blow,
dislodged, so it seems, from your narrow cloister of sense,
you sit
and mutter
and consider the evidence:

Vision — flattened-out, black-and-whited.
The Universe — turning away as if slighted.

Did he hit you, or did he hit everything else?

And here he comes a second time in a terrible sulk
with his terrible bulk
bashing you backwards, again, to the Black Pond’s edge.

Our suggestion, if we may? Give up.

Lie in the pond and drink the black water.
Drink it like cold tea from a saucer.
Drink it until you are dead.

Yes, that’s what we said.

Eat it, swallow it, the pond’s deepest tar.
Good for you, o super-squeamish one,
who have lived half your life like a ninja in your nasal cavity,
starting at sounds, wincing at the hardness of stones…

Because now you’re in it, floundering and grappling,
your weight and his dragging you darkly below.
Will you fight to the last belch of life,
releasing it upward in a tree of silver bubbles?

And look! Englobed there, rising past you,
scenes of your former days:
the vixen’s licks, the tiny claws of your offspring,
great fights and great losses, tableaux of defeat,
and you, you, back in the Borough, thick in your sleep,
snoring like traffic.