There is an “applied philosophy” movement afoot in the world today. In times past philosophers from Aristotle and Lao-tzu to Bacon, Descartes, Hobbes, Locke, and Hume applied philosophical insights and methods to quotidian matters of diplomacy and public policy. During the Cold War, however, philosophical inquiry — particularly in the United States — grew largely abstract and detached from public affairs. While a handful of the century’s more public philosophical figures, such as Bertrand Russell, John Dewey, Jean-Paul Sartre, Simone de Beauvoir, and Herbert Marcuse, actively participated in — indeed, played key roles in influencing — the events of their times, they stand distinctly apart from the prevailing tendency among their contemporaries. Worse, philosophy has been confined almost exclusively to the isolated and isolating groves of academe.

All that seems to be changing, however. In the past few years men and women who once seemed burdened with doctorates in philosophy and consigned to the hermetic margins of society have begun engaging in what’s being described as “philosophical practice.” Besides practicing individual client counseling, these brave new philosophical practitioners are engaging in philosophical discourse with children, working with schools on educational programming, and consulting with American corporations on everything from dilemma training to designing, building, implementing, and maintaining codes of ethics. Philosopher-led Socratic dialogues, or just plain old philosophical forums, have been sprouting up in American cafés, bookstores, senior centers, libraries, hospices, prisons, and shopping malls. For philosophers and interested laypeople alike it’s an exciting time.

There’s just one thing missing, though. What’s a movement without a magazine? There are plenty of scholarly and professional journals and newsletters devoted to philosophical practice, but where’s the Rolling Stone, the Wired, the Playboy of the popular philosophy movement? That is, where is the independently published yet glossy magazine — which supports itself through subscriptions and ad sales but maintains a sense of mission — that tackles the burning issues of everyday life in an informative, enjoyable, and thought-provoking manner, and with all the clarity, rigor, and precision that define philosophy? Is the very idea that such a magazine could survive in today’s marketplace just a pipe-dream? 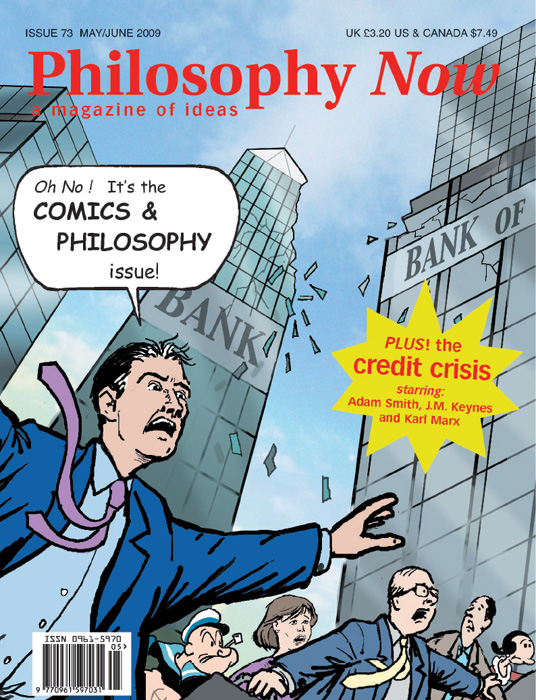 There are, in fact, two contenders. Philosophy Now and The Philosophers’ Magazine, both quarterlies published in London and distributed in the United Kingdom and the United States, have staked their claim in what was previously regarded as the inhospitable no-man’s land between the academy and the real world. Which raises another question: is there room enough, in that peculiar new “media space,” for both magazines? On closer inspection, it turns out that these two periodicals aren’t as similar as they first appear.

In 1990 Rick Lewis was working as a physicist for British Telecom Laboratories. A couple of years earlier, having decided that he wanted to be able to look back from his old age and see that he’d spent his time well, he’d returned to school and earned a master’s degree in philosophy. In 1991, when the British government began slashing funding for many philosophy departments without a squeak of public protest, Lewis decided to take action: he started Philosophy Now, a magazine devoted to what he calls “popular philosophy.” (“You can’t expect people to pay taxes for something if they don’t understand it and can’t see its importance,” he told me.) Today, thanks in part to the “applied philosophy” movement marching across Europe and the United States, the magazine’s circulation is at 8,000 and growing rapidly. 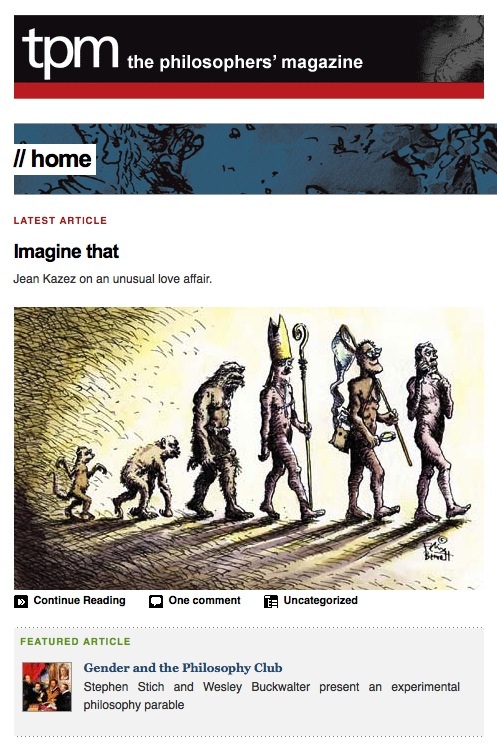 Lewis remarks that “one way you can tell that an idea is successful is that sooner or later people take it up and try to develop variations on the theme. For almost seven years this didn’t happen and I was starting to worry why not!” In 1997 Julian Baggini, a disaffected philosophy Ph.D., relieved Lewis of his worries on this matter. Baggini told his friend Jeremy Stangroom, a Ph.D. in sociology, that he was dissatisfied that no one was publishing a philosophy magazine “that was both genuinely a magazine,” as he put it to me recently, “and genuinely philosophy.” Stangroom, who’d become fascinated with the Internet, launched The Philosophers’ Web Magazine that spring, and Baggini launched its sister publication, The Philosophers’ Magazine, a few months later. Today, their website receives between 2,500 and 3,000 unique visitors per week, and their magazine’s circulation is already at 3,500 — double what it was a year ago.

Both magazines publish theme issues (on heavy-duty topics like “The Meaning of Life” and “The New Problem of Evil”), but they leaven the gravity of their feature articles with humorous cartoons, titles, and short features. Commenting on this, Lewis argues that The Philosophers’ Magazine has followed in his publication’s footsteps. Baggini and Stangroom respond that Philosophy Now’s redesign in the spring of 1998 was clearly an attempt to reposition itself in response to the challenge of its upstart rival. It’s true: at the level of format, it’s extremely difficult to distinguish between the two publications. Their covers and layouts are nearly identical, right down to the typefaces — one of the perils of desktop publishing, perhaps. Lewis insists that Philosophy Now’s redesign was strictly market-driven. “There is little point in producing a magazine to popularize philosophy if nobody has a chance to read it,” he explained in an editorial at the time, “and to be displayed by the big retail chains Philosophy Now really does have to look as slick as the style-obsessed citizens of the ’90s have come to expect.”

Although the two popular philosophy magazines are eerily similar in means, they diverge sharply when it comes to the question of ends. Stangroom likes to say that the point of The Philosophers’ Magazine, both online and off, is to “break down some of the barriers that exist between academia and the intelligent world outside.” And Lewis might describe Philosophy Now in similar terms. It’s clear, however, that whereas Philosophy Now wants to lead academics out of their ivory towers into the light of day, The Philosophers’ Magazine is more concerned with inviting interested laypeople inside for a guided tour.

Philosophy Now, for example, invites prominent (mostly British) philosophers — including Antony Flew, J.J.C. Smart, Richard Taylor, and Mary Midgley — to write original articles on matters of everyday importance, in a manner accessible to an intelligent magazine-reading public. The Philosophers’ Magazine, on the other hand, leans toward the interview form: leading philosophers are encouraged to be clear, but not necessarily un esoteric. Thus, in the Winter 1999/2000 issue of Philosophy Now, we find Midgley weighing in on the “selfish gene” debate with the elegant proposition that although everyone has “a Don Giovanni somewhere inside him,” we might ask why “there is usually also, for a start, at least a Figaro, a Tamino, and a Sarastro, as well as a whole crowd of unexpected characters whom the tide of life is continually producing?” In the Winter 2000 issue of The Philosophers’ Magazine, on the other hand, we find Baggini asking the eminent English philosopher Stuart Hampshire, “Aren’t the procedures by which you undertake [the conflict resolution mechanism that you advocate] in some sense dependent upon the kinds of principles established in deductive reasoning, such as the law of non-contradiction?” A scholarly philosophy journal might get even more technical than this, of course, but it isn’t “popular philosophy.”

It’s also indicative of the difference between the magazines that whereas Philosophy Now has gone to a good deal of trouble and expense to get itself shelved at ordinary newsstands around the world, The Philosophers’ Magazine can for the most part only be found in specialty bookstores. Dr. Charles Echelbarger, professor of philosophy at the State University of New York-Oswego and a member of Philosophy Now’s U.S. editorial board since 1998, expresses what could be the magazine’s mission statement when he admits to having become “increasingly frustrated over the fact that it is so difficult to explain to people outside academic life what I do.” Perhaps this explains the helpful sidebar to each issue’s editorial, which provides a guide to “philosophy in a nutshell.” The Philosophers’ Magazine turns up its nose at crutches like this; it’s edited for people who already know exactly what Echelbarger does. “Bertrand’s Break,” its regular crossword puzzle — named after Bertrand Russell — challenges readers to name, for example, a “Proponent of Theory of Relativity” or a “Follower of Plotinus.” This is fun, but decidedly in-crowd, stuff.

After reading half-a-dozen of the most recent issues of Philosophy Now and The Philosophers’ Magazine, I felt a burning need to ask the editors of both magazines about the ends of philosophy itself. “What’s it for, anyway?” I asked in an e-mail. “And are academic philosophers doing it right?”

Lewis replied that, although we may be living in the golden age of democracy, this is also the golden age of spin-doctors and lobbyists. So “clear thinking and a questioning, skeptical (rather than cynical) attitude to life are not merely relevant — they are vital survival skills!” Lewis doesn’t want to be lumped in with those in the “applied philosophy” movement who insist that academic philosophy is useless. Although he’s highly critical of professional philosophers “who’ve forgotten how to communicate in ordinary English,” Lewis’s editorial in Philosophy Now’s Winter 1999/2000 issue insists that, by training their students to have “a clear head and the courage to think fundamental things through for [themselves],” dedicated, scholarly teachers of philosophy are an asset to society.

In their responses to my question, Baggini and Stangroom were careful to note that The Philosophers’ Magazine covers philosophy as it is, not as it ought to be. “I don’t think people like me who have effectively given up doing original philosophy for writing about it have much right to comment on what the academy is up to,” Baggini insists. That said, however, he agrees with Lewis that philosophy can be useful to everyday living, but notes that “a great deal of philosophy has no relevance whatsoever to how we as individuals live our lives, and if we don’t accept that we’re going to falsely accuse philosophers of letting us down.” Stangroom admits to having a more jaundiced view about academic philosophy. “It seems to me that its strength is its scholarship — philosophers almost invariably know the minutiae of the philosophical canon,” he offers. “However, that is also its weakness, in that they frequently seem to know little else.” Stangroom and Baggini agree, though, that the greatest contribution philosophy can make to society is “to introduce clearer, sharper thinking on the issues which bother us, whether they’re moral, existential, legal, or epistemological.”

In the end the editors of both publications insist that it would be a fantasy to suggest that they’re bitter rivals. Dr. Timothy J. Madigan, another member of Philosophy Now’s U.S. editorial board, sums up the situation by noting that “it is important to try to return to the Socratic tradition of philosophy in the marketplace, while not unduly denigrating the Platonic tradition of academic philosophy per se. There’s no need to perpetuate a false dilemma — there’s enough food for thought at all levels for everyone to join the banquet.” And, after all, success for either publication is undoubtedly good for the other, because it expands the circle of people interested in philosophy. “Maybe,” Madigan suggests hopefully, “the western world is ready for a full-blown philosophical explosion.”