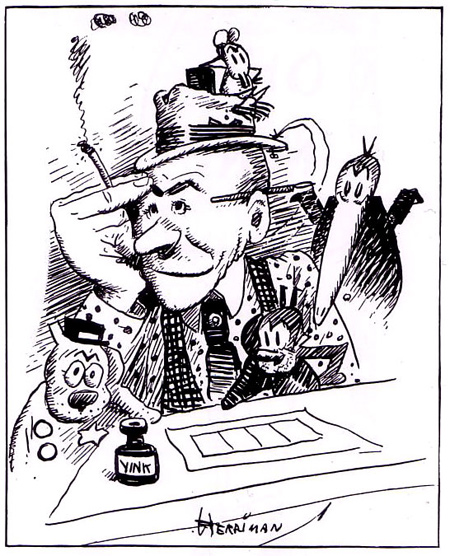 GEORGE HERRIMAN’s (1880-1944) comic strip “Krazy Kat” spun its three-point wheel for thirty years on the axis of a perfectly balanced love triangle (or masochism triangle — same difference). Much has been written about that triangle’s principals: Ignatz Mouse, a napoleonic id; Offisa Pup, upholding the prosaic squareness of Authority; and Krazy Kat, embodying grace as blank abuse (laid out by the missile of an Ignatz-hurled brick, Krazy might’ve said, like Swayzee, “Pain don’t hurt”). Less has been said about Herriman’s actual drawing. It doesn’t demand awe, like Winsor McCay’s art nouveau architectural fantasias, but it’s no less marvelous. Herriman’s line carries the expressive shabbiness of scratch and squiggle — a feel of notation, but a notation sufficient unto itself — a universe rustled up from shorthand. Ignatz’s feet, for instance, are never quite there: there are three parallel slashes of toes, and we have to surmise the rest of the foot based on their authority. Herriman had a special feel for darkness — of night — of shadow — of cavemouth — of Krazy’s silhouette in certain lights and moods. The dark is a living inkspill of black and bristling cactus quills. Or if that’s too harsh — then darkness composed of balled-up tumbleweeds, to be woven into a nest, or rolled away at dawn. His scritch of a line gives the pleasure of scratching an itch. What itch was his quill actually scratching? The itch of immanence? Of the invisible? Of a cloudless Arizona sky? With Herriman, you get the sense that relief was beside the point, the scratching was the real thing. It’s easy to imagine him giving himself just a moment to survey what his pen had stitched, then passing it off to chuckle and puzzlement and fishwrap, and scribbling on to the next installment, the pen vibrating like a bee’s wing or telephone line, full of private chatter made public in little boxes six days of the week, a full page on Sundays.

PS: Many years ago, when Fantagraphics was launching their “Krazy Kat” reprints, Chris Lanier wrote and drew this terrific page for the San Francisco Chronicle Book Review about it.

On his or her birthday, HiLobrow irregularly pays tribute to one of our high-, low-, no-, or hilobrow heroes. Also born this date: Dorothy Parker.

READ MORE about members of the Psychonauts generation (1874-83).