This is the sixth of seven posts about the future, by James Bridle. It was originally published at booktwo.org. Click here for an index page for this series on HiLobrow.

We live in strange times for news and newspapers, for government and secrecy, for states and individuals. And the reaction of the media is interesting. Two key responses have fled in opposite directions along the timeline.

One approach has been to go pure data, full real-time. The Guardian has embraced this approach and during recent spikes in attention — Tahrir Square, Fukushima — even the BBC has followed suit, live-blogging the present with only the slimmest editorial intervention, the barest nod to checking sources.

The other is to pull back, to go behind the paywall, to retrench. The Daily is the lowest example of this: it explicitly denies the new medium, even while it pretends to embrace it. “The Daily”, not “The Daily News” or somesuch: this is what you will have today. This news is push, not pull. Suck it.

Wikileaks presented a direct challenge to journalism’s claim to represent the media, as Work Without Dread noted:

[Journalists] primary reaction is to struggle with WikiLeaks’ wielding of information without narratives — except that of its own heroism — and without neutrality. Rather than addressing the reader from a position between the reader and the state, WikiLeaks make the reader a witness to a contest between the state and itself, while the media mediates between the files and the reader.

“Information without narratives”, the nightmare of an ever-unfolding situation, inimicable to interpretation. Benjamin’s Angel: “Where we perceive a chain of events, he sees one single catastrophe which keeps piling wreckage upon wreckage and hurls it in front of his feet.”

Strange, bathetic effects ripple outward. In the Pakistani media, a slew of faked cables attacking India (The Guardian notes, delightfully, that “this is the first case of WikiLeaks being exploited for propaganda purposes”). A serial Amazon prankster uploads a Kindle text purporting to be the complete cable set (it no longer claims this), prompting a torrent of baseless invective (Amazon being one of the many companies to withdraw services from Wikileaks’ online presence). Flash crashes in reality.

Wikileaks speaks directly to the immense paradox at the heart of all our liberal-tech thinking. People, given better information, will make the best decisions. Right? The more we know about any given situation the better we are equipped to deal with it.

According to this theory, the internet is the sharp tool of democracy, because it offers endless amounts of information which we may synthesise into a better world. But the reality is desperately obverse. Given these conditions, conspiracy run rampant. People cling to ever more extreme viewpoints, they cling to the edges, desperately seeking firmer ground. The 9/11 Truth movement, Jihadists, Birthers, the EDL. These are the best exploiters of this truth.

Information is supposed to flow towards truth, but truth occupies the higher ground. I’m not saying the theory is wrong: I don’t know of a better one. But it’s not that simple, either, and that bothers me.

Back in December, two days after the start of the Cablegate releases, Wikileaks tweeted:

WikiLeaks is the first global Samizdat movement. The truth will surface even in the face of total annihilation.

The original samizdat, an underground network of cheaply- or hand-printed texts, passed hand-to-hand by Soviet dissidents, was designed to evade censorship, bypassing official channels. It relies on a network of people who care; one of the most noticeable early reactions to Wikileaks in the media was boredom. The instinct was to deny that this information was interesting. As Work Without Dread notes: “Maybe, then, it’s actually the vastness of such uncaring that WikiLeaks brings to light, in so doing giving it the chance to be otherwise.”

Uncaring is the enemy of protest. And for those of us who have done things to get noticed; who marched, for example, a million strong through the streets of London against a war, and were ignored, uncaring is a very big enemy indeed.

So: an experiment. A return to samizdat. 200 newspapers, printed with a selection of the released cables, vetted for libel and D-Notice infringements (the two things that can still definitely get you into trouble if you republish them), distributed on the London Underground during the morning rush hour of December 15th 2010. Standard newspaper format, a bit of celebrity gossip (Andrew) and sport at the back.

Each newspaper was fronted by a simple hashtag, #wikileakspaper, to make researching the effect easier. 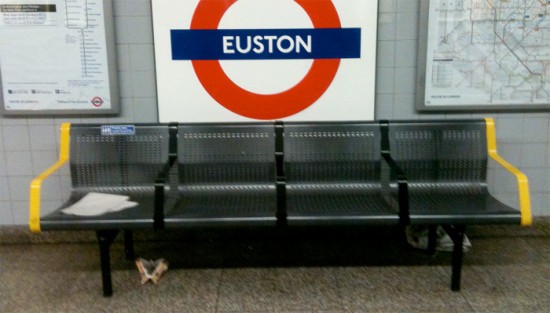 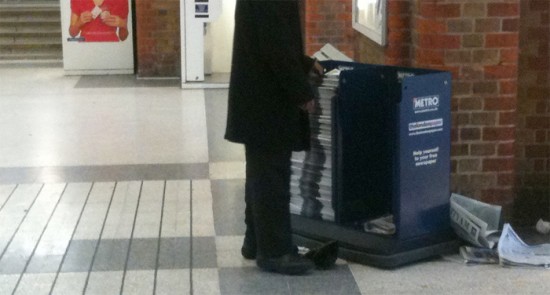 The effect was negligible. Some were read; the ones I saw were swiftly discarded. A single reference surfaced online, in, of all places, a Dutch Playstation forum. The London Underground is awash with free newspapers, 200 is a tiny number. When you spend an hour mooching about at rush hour, you notice how many are being constantly swept up.

Consider #wikileakspaper an unsatisfactory experiment, but a necessary one. For a while now, I have been pissing about on the boundary between physical and digital, printing out bits of the internet, making things that look like the things we know (eg, eg, eg). And I realise I have been doing this in order to understand what happens when things pass in the opposite direction; into air. Because the traffic is almost entirely in the other direction. We are taking the things we know and transmuting them into something we do not yet understand: books, literature, news, truth.

Jennifer Brook, who makes artists’ books and iPad apps, speaking earlier this year: “Craftspeople are technologists, and technologists are craftspeople; the only difference is the velocity of the material they choose to work.” Humbly, I would add a further qualification, a further dimension. Celerity, or “proper velocity”, is velocity which takes the effects of relativity into account: the observer is travelling too; we are all travelling in time. The material has its own celerity.

One day, politics will take this into account. From an alleged NSA text:

Our efforts might, in some cases, be better applied to understanding the motivations and dynamics that are creating the secrets in the first place, with an eye toward coming up with a system that better maps to the human processes and behavioral tendencies.

We may find that by shifting the structures, rules, and value systems in human space, we have fewer secrets to deal with. We may find that we can alter the human-space systems to clarify the context and valuation of secrets, and put them into a form more amenable to elegant automation. We must get back to the notion that, in dealing with secrets, the human/automation construct works better if the whole system is adapted to the behaviors, values, and motivations of the humans.

Update 28/3/11: This is as much a placeholder for myself, but after a couple of recent conversations, it strikes me that the #wikileakspaper is an attempt to disrupt the echo chamber; that is, this effect mentioned above that people cluster around their existing interests despite the many options available to them. By printing out something (in this case, an internet site) that people would not normally read/visit (might actively resist visiting), and putting it into the world, we increase (marginally) the possibility that they may discover it anyway… This is an inelegant and inefficient solution, and one that failed, but I think that might be what’s going on.

Update 31/3/11: And is there something in the fleeting quality of the newspaper that points even more strongly towards true fleetingness of electronic information. More so than books, which become rare, these newspapers disappear entirely, swept up, burned or buried.

This is the sixth of seven posts about the future, by James Bridle. It was originally published at booktwo.org. Click here for an index page for this series on HiLobrow.

See All Posts by James Bridle

James Bridle is an editor, publisher, writer and artist based in London, UK. He blogs about bookfuturist topics at booktwo.org.