HiLobrow.com has curated a collection of our favorite recent blog posts by comic-book scriptwriter and translator Adam McGovern. This is the ninth in a series of ten installments. 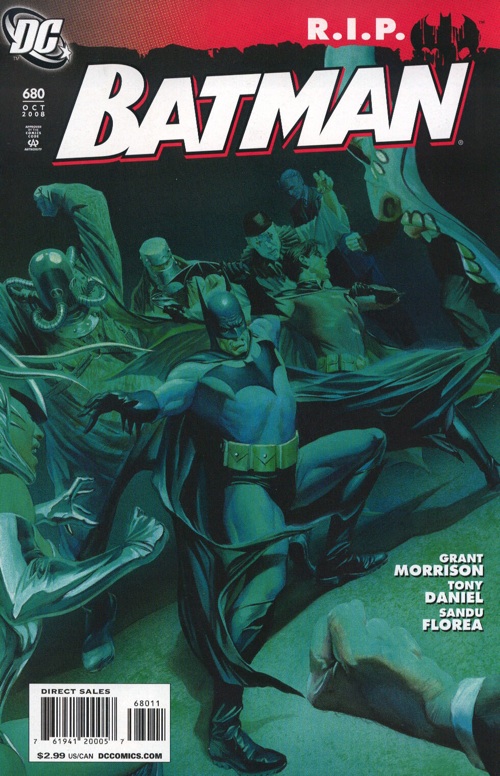 The penultimate chapter of “Batman R.I.P.” shows how truly new to comics what Grant Morrison is doing is. There have been life-and-death, good-and-evil struggles from the dawn of adventure fiction, but the threat faced by Our Hero is typically situational, not existential — the durability of Good is seldom in question, just the triumph of one or another of its agents. But in “Batman R.I.P.” it’s both more personal and more universal than ever.

The opponents in this drama are not just adversaries, but the guilts and flaws and doubts that chip away at confidence and optimism and ethics in every human mind. They are personified, of course, for the physical-conflict requirements of the action-adventure genre, but they represent much more (and in some ways much less) than individual human beings in the manner of the greatest myths. As this phase of the “R.I.P.” event reaches its conclusion, we see that what Batman’s enemies need is not just his defeat as a person but his removal as a possibility.

He is being beset by a secret cabal of decadent aristocrats and power-brokers who live by predatory impulses; their agents are psychological grotesques playing out sadistic imperatives they feel are their true nature though they, like the orchestrators of the game, live most of life in a mask of professionalism and propriety; the human WMD all of them have unleashed is the Joker, whose aim is to get Batman to give up — not the 70-year fistfight of the two men, but the belief not just that humanity can triumph but that the universe really offers any logic and mercy to restore.

Morrison is tapping the same elusive truth that Jason Aaron is over in Vertigo’s Scalped with the outwardly brutal and inwardly bitter mob casino owner Lincoln Red Crow: all the grandest villains in both life and literature are not really incorrigible, they’re inconsolable. They’re people who have something they can’t get over. In Red Crow’s case it’s the indignities of his people’s colonization and the privations of the early 1970s’ renewed war on them, with a hardened conviction that only power brings peace; in Morrison’s scenario the Joker is someone driven so mad by the inhumanity of our era that he chooses to embody it rather than oppose it. For the Joker’s peace of mind and the shadowy Black Glove organization’s predatory self-interest, someone who believes that more is possible like Batman must be de-existed.

This is adventure fiction that places its hero not just in the kind of predicament we can thrill to, but in the same kind of dilemma we feel threatening the meaning and hopefulness of our own lives. “Dark” comics of the preceding two decades tapped our basest impulses in a way that shined no light into them; this comic conveys a sense of psychological danger that, like the recent Batman movie, illuminates the best of us by hard-fought contrast. Morrison’s All-Star Superman, as befits that more upbeat character and his world, lit the proverbial candle; his Batman dares to ask the darkness why. “Batman R.I.P.” is not a comic which, as per the current cliché, changes everything — it is, for a change, a comic that shows how everything really is.