HiLobrow.com has curated a collection of our favorite recent blog posts by comic-book scriptwriter and translator Adam McGovern. This is the second in a series of ten installments. 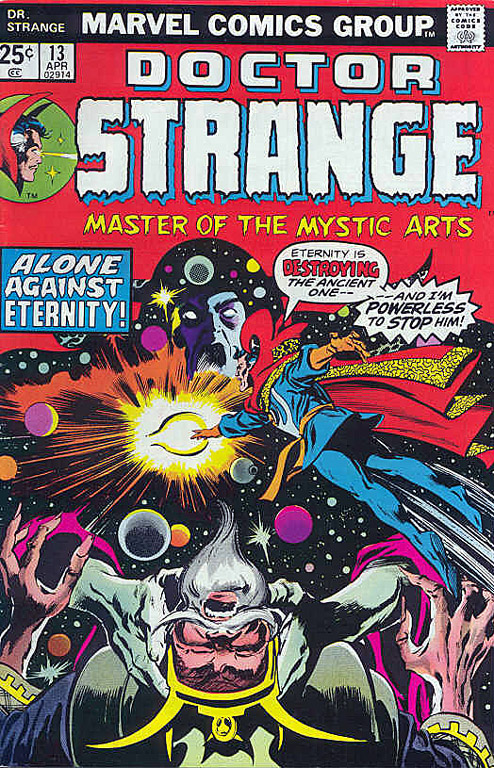 The other day my girlfriend came back from a flea market with two issues (12 and 13) of Doctor Strange from 1975. Even in the often autopilot mid-’70s this series was always a notable oddity (though so much of one that I never found these issues at the time). Not just because of the swirling, surreal art of Gene Colan, congenitally incapable of phoning it in no matter how tight the deadline or towering the in-box. And not just because one of the looniest of mainstream writers, Steve Englehart, had (I’d managed to forget) been put in charge of this book in addition to his chores getting Captain America to quit over Watergate, holding weddings between Avengers who’d attained goddesshead and ones who’d died a few issues ago, etc.

It has something to do with an adventure, culminating in Doctor Strange #12 and 13, in which the hero returns to his physical body from a hyperdimensional plane after the personified spirit of the universe has a nightmare in which Earth is destroyed and the Doctor has to get this being to dream it back up, upon which a concluding caption informs us that our hero needs to “sit there a very long time…coming down.” (Literally, yes, I guess, though this is a few pages after an essay from Englehart announces the good news that the title is being upgraded from bimonthly to monthly status, offering his opinion that, “despite all the hue and cry over mind expansion” when the book was last cancelled in the late ’60s, “there just weren’t enough spacey people reading comics” then, whereas now “there are so many spacers around that this book is a hit” — a hit of what, he does not say, though I think it must’ve found its way into the Comics Code censors’ coffee before they reviewed this issue.)

Wittingly and otherwise, even mainstream comics were littered with psychedelic imagery and symbolist stories by the time these came out, but here Englehart achieved a level of abstraction I hadn’t realized had happened so early. The “Eternity” character/antagonist is essentially a self-aware universe, an automatic Word of God that grows threatened when the beings he wrought (and wrote) have so many ideas of their own that they can question him, thus shaking his own sense of reality and supremacy. This is adventure pulp on a raw semiotic level that wouldn’t become commonplace ’til the metaphysical epics of Alan Moore 25 years later — and though it is, within the space of a handful of issues in a forgotten run of spinner-rack ephemera, the basic concept and plot of Grant Morrison’s landmark Final Crisis, it is just as notable for the ways it remains confined to the conventions of its period as the way it anticipates the innovations to come.

Suitably for such a self-reflexive story, the narration really stands out — that era is now infamous for its expository dialogue and often-redundant captions, and even Englehart’s eccentric and poetic phrasing has its share of that telling-you-what-it’s-telling-you factor. Contemporary comics writers have found their way around this by shifting an internal monologue between characters (the trademark of Frank Miller) to give perspective on the action and lend immediacy to the narrative; the best of the current classicists like Dan Slott in Mighty Avengers go back to the third-person omniscient but give it a sense of the words emanating from the very texture and tone of the incidents portrayed rather than any outside observer (and it’s no coincidence that Slott’s first arc on that book involved various mystics being trapped within or taken over by a sentient magic tome).

Mere descriptions and “meanwhile”s and “suddenly”s, it is popular these days to say, “take you out of the story,” and that’s never to be desired. However, it should be remembered that comics writers of Englehart’s era were obliged to step into the story, by both professional process and contemporary culture. Marvel’s books were famously done plot first, art second, and script last, so a certain travelogue-narrator function was thrust upon the writers. And at least since the Batman TV show, producers of popular culture were at pains to disassociate themselves from the “establishment”’s authoritarian voice — even in entertainment — and let their youthful audience know they were in on the joke of mass-market fantasy, by addressing that audience directly, fourth wall be damned.

Comics from Watchmen onward could “comment on themselves” like any avant garde artwork, but the early-’60s to late-’70s was the heyday of comics talking about themselves. Underrated scripters like Jack Kirby would tell you things in the captions that you couldn’t see in the pictures (like his rage-aholic antihero Orion’s emotional state and psychological conflicts), and sly Swiftians like Steve Gerber had the skill to write narration that not only satirized what was going on inside the panels but could curve back around to satirize itself (and its writer and readers). Archie Goodwin’s prose was so precise and economical that the issue scarcely arose. A whole new comics language would have to evolve. Englehart and Gerber became fluent in it; Goodwin’s and Kirby’s careers did not stretch into the current era. But it’s still impressive to see which creators saw so much of the writing on the wall.