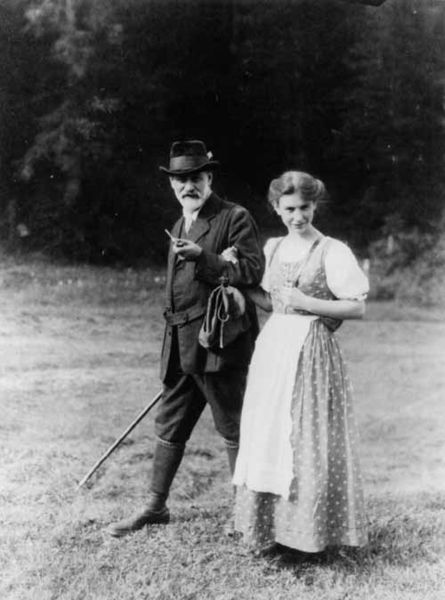 Youngest daughter of Sigmund and Martha, the Austrian-British psychoanalyst ANNA FREUD (1895-1982) published The Ego and the Mechanisms of Defence in 1936. This work built upon her father’s tripartite model of the mind (id, ego, superego) and helped to found the school of ego psychology by further delineating and exploring the ego’s functions. Among these functions are the defense mechanisms, discrete means by which the ego limits anxiety and displeasure. Anna Freud cataloged these in detail and emphasized their importance in managing an individual’s relational experiences. For example, faced with aggression from an external source, the ego might employ identification to manage the threat; identification is a way of becoming like another by making the other part of the self. What Anna Freud called “identification with the aggressor” (the defense behind Stockholm Syndrome) allows a captive victim’s ego to survive trauma by bonding with her captors: passive becomes active. As a young woman in her twenties, Anna Freud was analyzed by her father. (This would be unethical by today’s standards but back then psychoanalysis was a new and developing field; Melanie Klein analyzed her kids, too, and Carl Jung tried to analyze his wife). Imagine lying flat on your back, exposed and vulnerable, free associating to your dad about intimate things like masturbation and fantasies easily interpreted as the desire to kill your mom so you can sleep with, well, your dad. Anna Freud later became a pioneer in child psychoanalysis.

On his or her birthday, HiLobrow irregularly pays tribute to one of our high-, low-, no-, or hilobrow heroes. Also born this date: Jean-Luc Godard.