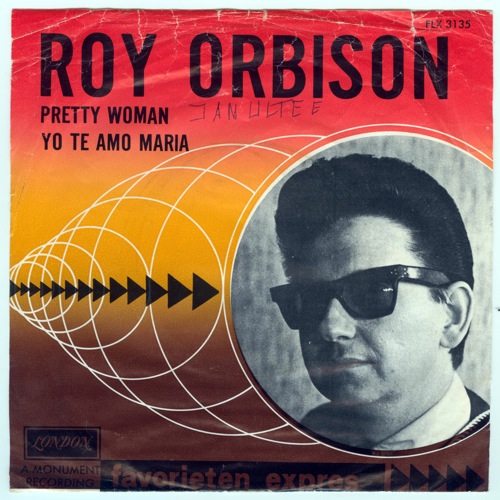 I first heard ROY ORBISON (1936-88) when I was in high school: The Traveling Wilburys’ first single, “Handle With Care,” was on heavy rotation on MTV. Unlike the rest of those mellowed-out geezers, Orbison scared me — a creepy evil priest who had replaced his clerical collar with an iron cross. Turns out Orbison was a sweet, timid man who liked model airplanes and whose dark sunglasses tempered his stage fright. His early country and rockabilly recordings got him noticed, but his pained, devotional songs about dreams and loss were more complex compositions, and truer reflections of his life. “Only the Lonely” (1960) showcased his powerful, operatic voice. Orbison’s ballads convey an earnest sadness and longing, but are easily bent toward sickly and fucked-up when used in films by David Lynch (and, fine, Harmony Korine). I might have ignored the “candy-colored clown” intro to “In Dreams” (1963) if I had never seen Blue Velvet; now the clown is a pasty-faced Dean Stockwell mock-crooning for a twitchy sadist. Orbison’s first wife stepped out on him while he was touring in the early ’60s; they reunited for a few years, but she was killed in a motorcycle accident — perhaps the “evil priest” wore a biker cross in memoriam. While still grieving, he lost his two oldest sons to a house fire. The ’70s and early ’80s brought successful Orbison covers for Linda Ronstadt, Nazareth, and Van Halen, but for Orbison only a dead brother and a triple bypass. By the time The Traveling Wilburys shot their second video in 1988, he was dead of a heart attack at 52.