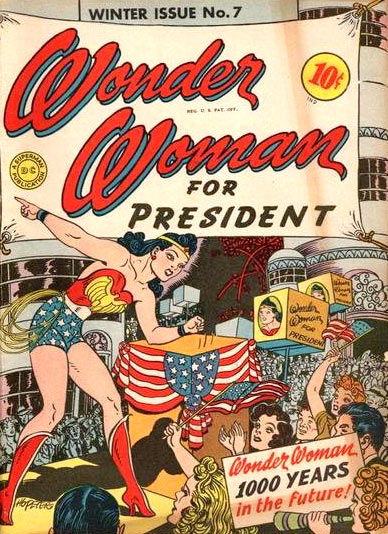 In the 1920s, psychologist WILLIAM MOULTON MARSTON (1893-1947) pioneered research in “systolic blood pressure symptoms of deception and constituent mental states,” which led to the invention of the first lie detection test; it also led to the invention of the first mainstream feminist superhero. Aided in his research by his accomplished wife, Elizabeth, Marston concluded that women are more honest and reliable than men. What’s more, via popular-psychology articles he insisted that society was doomed unless men, whose notion of freedom was inherently violent and anarchic, learned to regard women’s ability to reconcile freedom with “love allure” (read: submission to loving authority) as a form of strength, not weakness. In 1940, Marston was interviewed for Family Circle by Olive Byrne, who would live for decades with the Marstons in polygamous bliss, about the educational potential of comics. This led to a gig as a consultant to the publisher that would become DC, for whom William and Elizabeth dreamed up a superhero who’d triumph not through force alone, but through love. Wonder Woman, who helped the US government fight fascism while challenging the masculinist world of superhero adventures (and promoting the virtue of “binding games”), made her debut in All Star Comics #8 (December 1941). The character was inspired, Marston’s children claim, by Elizabeth’s intelligence and modernism, as well as by Olive’s athleticism and predilection for large “protective” wristlets.

READ MORE about those born on the cusp between two generations. William Moulton Marston was born between the Modernists and the Hardboileds.