Prison Made of Type 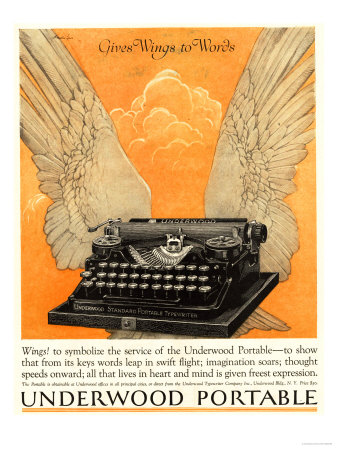 The Iron Whim: A Fragmented History of Typewriting (Cornell), by Darren Wershler-Henry.

While incarcerated in a madhouse in mid-18th-century England, Christopher Smart scribbled a poem suggesting that God was “punching” words onto the blank page of his imagination. Two centuries later, William S. Burroughs imagined the Soft Typewriter, a demiurge that writes each of us into being and controls our behavior. In The Iron Whim, Darren Wershler-Henry insists that, until quite recently, the act of typewriting exercised a sinister influence over our lives. Just because Smart and Burroughs were paranoid, he suggests, it doesn’t mean their typewriters weren’t out to get them.

[This essay first appeared in the New York Times in May 2007.]

The typewriter, of course, didn’t exist in Smart’s time. But its precursors — movable-type presses, windup text-producing automata, prosthetic writing devices for the disabled, document duplicators like the “polygraph” used by Thomas Jefferson — were as much a product of the Enlightenment as the notion that society should become an administered utopia, with individuals adjusting themselves to its immutable norms. Even before the typewriter was invented, Wershler-Henry claims, its “logic” enforced a disciplinary regime, modifying “our behavior, our social structures and our very sense of ourselves.”

Until I.B.M. introduced a proportionally spaced typewriter in 1941, each character on a typewritten page — whether typed using the 1843 Patent Printer (considered the first American typewriter) or the 1870 “writing ball” invented by Pastor Rasmus Hans Johann Malling Hansen, head of an institute for the deaf in Copenhagen — occupied precisely the same amount of space. Herein lies the crux of Wershler-Henry’s argument: the monospaced typewriter implicitly divides each blank sheet of paper up into a series of cells on a grid, which is “the essence of the disciplinary structure that typewriting applies not only to typewritten texts but also to … larger society, adapting the world to its exigencies.”

Come again? Here the influence of Foucault, in particular his book Discipline and Punish, is apparent. According to Foucault, discipline — a mode of social power that seeks to modify our attitudes and behavior in ways that make us more productive — worked subtly through social institutions. In factories and prisons, the “technologies” of discipline (now known as time-and-motion studies, ergonomics and so on) broke all human tasks down into the smallest divisions of time and movement; once internalized by workers and prisoners, such discipline supposedly made them more manipulable.

Thanks to these technologies, Foucault lamented, the Enlightenment dream of an administered utopia had come to pass. Likewise, although the first usable typewriter wasn’t manufactured until 1873, by the firearms producer E. Remington & Sons, the logic of typewriting, Wershler-Henry writes, has shaped “not only written documents but also bodies, workplaces and practices, institutions and politics.” Thanks in part to typewriting, society itself became an invisible prison, each of us contentedly occupying one of the cells in its grid.

Wershler-Henry, a professor of communication studies in Canada, seems particularly exercised by touch-typing, which requires that practitioners not only memorize every aspect of the illogical QWERTY keyboard but also position their bodies vis-à-vis the desk and typewriter just so. (In high school, he notes rather smugly, “I wasn’t in the typing class, and still can’t touch type,” though he’s happy to pass along a tip about how to turn a sharpened pencil and the H slug of an electric typewriter into “a small but dangerous missile launching device.”) But this is where the type bars, if you will, of Wershler-Henry’s thesis begin to collide and jam up. After all, the most famous operator of one of Malling Hansen’s machines was perhaps Foucault’s greatest influence: Friedrich Nietzsche, who once typed that “THE WRITING BALL IS A THING LIKE ME: MADE OF IRON / YET EASILY TWISTED ON JOURNEYS.” Wershler-Henry attempts to read this plaintive bit of doggerel as evidence that Nietzsche recognized that “typewriting blurred and complicated the lines that Enlightenment thinking had drawn between body and machine,” but this exegesis is unconvincing at best.

The malign influence of typewriting upon our behavior and our social structures remains doubtful. When it comes to our sense of ourselves, however, Wershler-Henry may be on to something. Among the book’s many fascinating topics — America’s early-20th-century erotic fixation on the Type-Writer Girl; the link between Remington’s efforts to develop faster typists and the origins of domestic engineering, via the real-life protagonist of Cheaper by the Dozen; the mathematical formula proving that no number of monkeys could randomly peck out Hamlet; the 2004 flap over the special characters used on a typewritten memo purporting to show that President Bush received preferential treatment in the Texas Air National Guard — the most persuasive is the persistence of the eerie feeling that we’re not alone when we sit at the typewriter. From a turn-of-the-century short story in which an author’s typewriter picks up signals from a ghost, to Theodora Bosanquet, Henry James’s Type-Writer Girl, who supposedly took dictation from James after his death, to Paul Auster’s illustrated book about his own haunted typewriter, the examples pile up. As Burroughs discovered, when you compose at a typewriter, it’s easy to become one’s own amanuensis, merely taking dictation.

So are we freer, more ourselves, than we once were, thanks to the rise of the computer? Wershler-Henry seems to think so. Unlike typewriting, a discourse whose rules are determined “by mechanical devices and hierarchies,” he writes reassuringly, “computing is a discourse whose rules are determined by the functioning of software and networks.” But for anyone who has ever run afoul of software and networks, this is cold comfort indeed.