HILOBROW is proud to present the ninth installment of James Parker’s The Ballad of Cocky the Fox, a serial tale in twenty fits, with illustrations by Kristin Parker.

Fit the Eighth was an interlude, a parenthetical vision-quest that began when a sly country vixen encouraged Cocky and Champion to sample a fungus with peculiar properties. The corpse of Holiday Bob appeared to Cocky, and told him that he had to take the rabbit to Barbecue Towers, the lightning-scorched oak tree where the ravens live. Bob also warned Cocky and Champion that Lost Johnny’s Northside foxes were scouring the countryside for them…

Up we go, up the track at the edge of the wheatfield, seeming to ascend into this towering windless afternoon. Grass and dried tractor-ruts. Me on my twinkle toes, him lumping and loafing along on his forelegs, white ears against the blue. Trot-trot-flump, trot-trot-flump: the triumphal metre of our progress.

‘Yup,’ says Champion. Ahead of us they’re laying on another huge mute pageant of late summer cloud.

‘What is that,’ I say, ‘some kind of cumulus? Altocumulus castellanus?’ 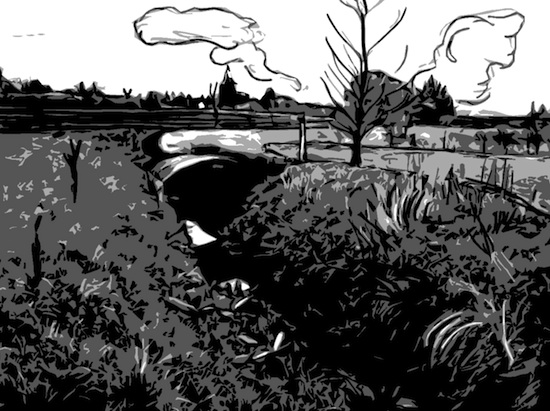 Champion is squinting upward. ‘Hawk,’ he says. His senses are sharp! He’s living on good greens now, the marrow of the country, not that crap I was feeding him back in town.

Untouchable? Yes. Since our session with the fungus, that was pressed upon us in the wood by the saucy vixen whose name I can’t remember, Champion and I have been in a state of grace. Moving through the world like wizards, we two — pacy, gifted, our toes and ear-tips crackling. Glorious fungus! The Champlifier had about four helpings, munching away dull-eyed and noisome, his usual thing, displaying no outward marks of revelation. And then later I think I heard him snoring. But he’s with me now! Spooled back somehow from severe autumnal doldrum, we’ve been restored to the high August of our days: nettles are tall, thistledown is blowing, through every gap in the brambles a buttery wedge of heartland Essex. It’s a miracle!

Our plan is to start some kind of movement. A gathering or something. A colony. A new race. Early days yet, but we’re deeply agreed on the basic thing of us being in charge of everyone else, by virtue of our closeness to life’s essence. We’re in a swoon of concord.

‘Are they ready for us out here, old buddy?’ I say.

‘Ready or not,’ says Champion.

‘For how long have they lived in lowness, these beasts, just snarling and spitting along?’

As for me… Well let’s just say, if Nora could see me now, in the wild nudity of my spirit, she’d collapse in dread. Nora my vixen, her heart scaled like an old kettle from our endless spousal boil-ups, she’d do a backflip. She’d — 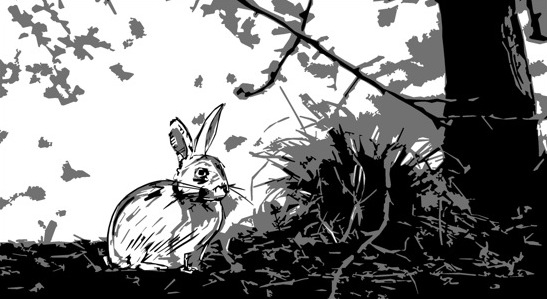 I listen. The wheatfield next to us bristles. I can hear the fine tick and crackle of fecundity across its whole surface, the sound of a field about to be harvested. Beautiful.

‘Through here,’ Champion stares into the yellow-white cave of wheat-stalks. ‘Fifteen seconds.’

The ears micro-adjust. ‘Two. No. Three.’

‘Right. Watch this.’ I arrange myself — expression of modest beatitude, bum on the ground, Cocky sejant. ‘I’m going to blow their minds.’

Now I hear them, thumping and huffing towards us at speed — definitely a Northside patrol, travelling with that heaviness. Poor rubbish, they don’t know what they’re in for.

And they crash through as if expelled or bounced from the wheatfield. Two hefty dark-coated foxes, heads turning, eyes narrow against the afternoon, classic Northside snouts. Plus a shitty little badger, a local by the looks of him, low to the ground and reeking of enmity. He must be their scout or something. They need a scout — they’re far from home out here.

‘This him?’ says one of the foxes.

Contrary to expectation, these goons do not reel back from my superb-ness. Instead they rush upon me with buffeting noses and offensive breath. But I will not speak. No fight-talk here, no bluster or ball-brag. I will gaze, smile, incline the head, and my radiance will break upon them inwardly.

‘What did they say he’d smell like?’ says the other fox.

‘Is this him though?’

‘Scrag him, fucking do him, why are we hanging around?’

The badger hoists himself up, gives me a leer of all-purpose fury and then headbutts me. I go over backwards, more in surprise than anything.

‘He’s supposed to be tasty. This isn’t him. Look at his face.’

‘He’s gone soft or something.’

‘Who cares? CAN YOU HEAR ME? ARE YOU MENTAL?’

‘IF YOUR NAME’S COCKY, WE’RE SUPPOSED TO DO YOU. Heh heh.’

‘Johnny said to make sure he never came back.’

‘Johnny’s scared of him.’

‘Get a good mouthful, Gibby. All the pipes in one good bite.’

Face it, my magic isn’t working. They’ve got me pinned down. The head of the fox called Gibby is above me, jaws wide and dripping with half-laughter.

‘You can talk, can you? That’s good. Because now Mr Gibby is going to EAT YOUR WORDS.’

‘What have you seen?’

‘I’ve seen pylons moving in rows across the fields, elbows out like ladies lifting their skirts!’ 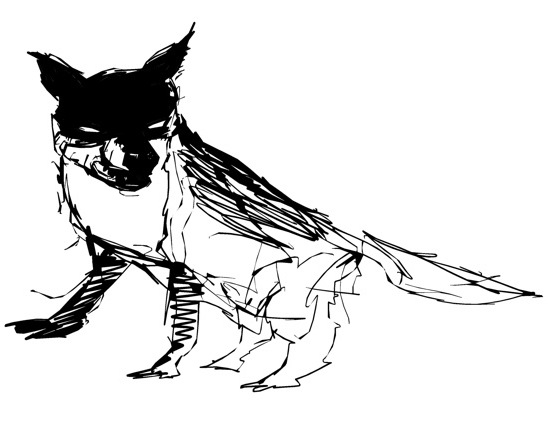 Then Champion gives a little cough. Gibby’s head turns, and a drool-string hits me in the eye.

The Champ is shuffling out of the hedge. One twig rides his ear like an antenna. ‘Beasts, beasts,’ he says gravely. He does actually look rather spiritual. ‘Beasticles.’

‘The soft bits are mine,’ says the fox called Maurice. ‘You know, the organs.’

‘But this is lowness,’ says the Champ. ‘This is all snarling and spitting. Be more like tuna!’

‘Wait a minute.’ The badger is growling, thick-accented. ‘You don’t touch this rabbit.’

‘What is this, World Softness Day?’ says Maurice. ‘Fuck off out the way of our lunch.’

‘One of your fairytales, is it, Shakes?’ says Gibby.

‘You’re off your patch, Northsider,’ growls Shakes the badger. There’s going to be a battle!

This is my moment. Go time. An up-strike, coming hard off the canvas, straight at Gibby’s exposed gullet. ‘De-throat me, would you?’ Fox neck, fox cartilage, good days. With a contact spark of pure joy my teeth meet somewhere behind his windpipe, and then I’m ripping the scream right out of him. Behind me there is scuffling, a squealing — Shakes the badger seems to be tangling with Maurice. ‘Wild nudity!’ cries Champion.

Then it’s all over.

Gibby stands there, spilling his strength in pulses, with his tubes hanging out.

‘I have a hideous colour inside me,’ he manages. And then, going a bit wobbly: ‘Help me, Maurice.’

‘Maurice fucked off, mate,’ says Shakes. There’s a Maurice-shaped hole tunnelling into back into the wheat, the ripped stalks quivering.

Distantly, in the vast placidity of the afternoon, we can hear him trampling about and swearing.

Shakes looks like he wants to get after him. ‘He doesn’t know his way out of there,’ he says, flexing his claws.

‘Leave it,’ I say. ‘Let him get home. A message to the Northside. Incidentally, was that headbutt really necessary?’

But Shakes ignores me. He’s watching Champion, waiting for a word. 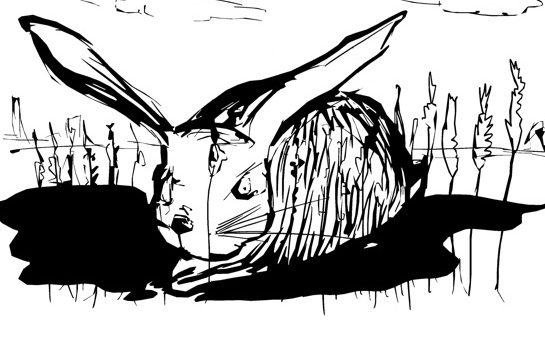 Gibby now gurgles his last. My first fox-on-fox kill since… Two shrieks come from overhead, and I look up — it’s the hawk, on his sky-stilts, between pockets of glare.

The Champ, who has been involved with some buttercups, raises his head. I notice that he’s wearing a light spray of fox-blood. ‘Magic fungus, gap in the brambles,’ he says.

Then he looks at Shakes, nods toward the wheatfield.

‘Find him and finish it.’

Has Shakes the badger jumped on the fox-and-rabbit bandwagon?
Why is Lost Johnny scared of Cocky?
And what of Cocky’s delicate psyche, now that his fungus comedown has turned murderous?
Find out in the next episode, on Thursday, September 23.

Read the ninth issue of The Sniffer, a COCKY THE FOX newsletter written and edited by HiLobrow’s Patrick Cates.