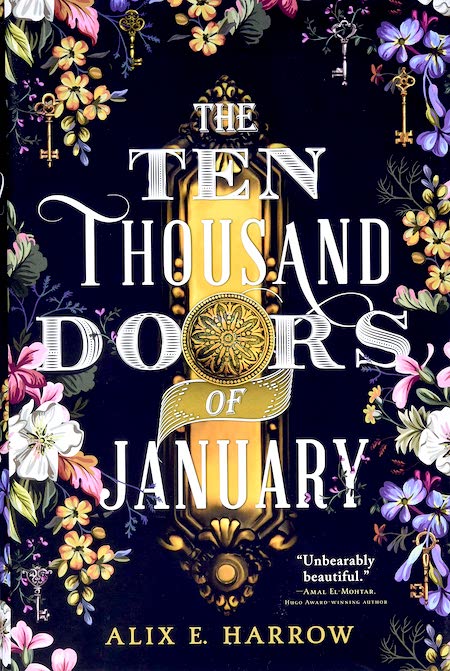 Harrow’s debut novel, set in 1901, concerns January Scaller, a red-skinned young woman whose father works for a Locke, a robber baron in the mold of William Randolph Hearst. Her mother, she believes, is dead. She discovers that our world contains all sorts of “Doors” leading to other worlds; in fact, many of the most consequential shifts in the history of humankind may have had something to do with these doors. Visitors from other worlds have been here; and some of us have visited their worlds too, returning with dangerously subversive ideas and know-how. When Scaller’s father disappears, January goes on the run; and discovers, in doing so, not only that Locke has enriched himself by exploiting these Doors… but that a reactionary — racist, sexist, misogynist — secret society exists whose mission it is to close the Doors forever. Janu­ary’s autobiographical narrative, spanning decades, is interleaved with passages from a mysterious book, by “Yule Ian Scholar” — a work of fiction, or not? — that will help her understand the Doors… and her own mysterious origins, as well. Accompanied by a cadre of friends — Samuel, the grocer’s son; Jane, a Kenyan woman sent by her father to be her companion; and Bad, her ferocious dog — January roams the country, avoiding vampires and assassins, in search of a Door that will lead her… home. Along the way, she discovers the world-making and -remaking power of story telling.

Fun facts: Asked about her inspiration for the places to which her fictional Doors lead, Harrow said, “I worked backwards, beginning with a story or event in our world and imagining the secret Door that might exist behind it. The Indian Rebellion of 1857. Toussaint L’Ouverture’s revolution. Selkie stories in Maine and boo-hangs in New Orleans.”