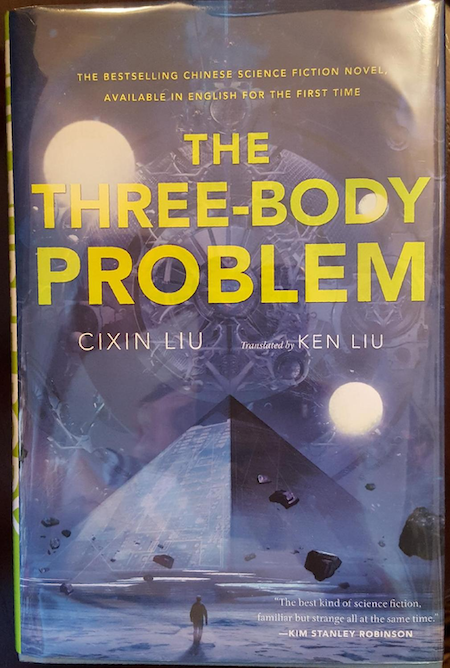 During the Cultural Revolution, Ye Wenjie, an astrophysics graduate who has been imprisoned for seditious environmentalism, is recruited to work on what turns out to be a secret military project — sending signals into space to establish contact with aliens. When Trisolaris, an alien civilization on the brink of destruction, intercepts one of Ye’s messages, she is glad to learn that they’ll invade Earth (though it will take them nearly 500 years to get here)… since she believes that humanity deserves to be wiped out for its crimes against the natural world. A fellow antispeciesist later helps her establish a militant and semi-secret Earth-Trisolaris Organization (ETO) as a fifth column for Trisolaris. In the present day, a nanotech professor and a detective investigate the mysterious deaths and suicides of several scientists — all of whom, they discover, are involved in various factions that have developed within the ETO. One faction, the Redemptionists, have developed an ingenious way to help the Trisolarans find a solution to the titular three-body problem — i.e., their planet is passed between three suns orbiting each other in an unstable system, with cataclysmic consequences. Meanwhile, the Trisolarans have sent to Earth 11-dimensional supercomputers capable of causing mass hallucinations and disrupting Earth’s particle accelerators (to prevent Earth from developing technology advanced enough to fight off the invasion). It’s an epic saga, endlessly imaginative and full of surprise twists.

Fun facts: The most prolific and popular sf writer in China, Liu won the 2015 Hugo Award for best science-fiction novel for this novel — the first time the prize has gone to a Chinese author. The two subsequent installments in this series are The Dark Forest (2008) and Death’s End (2010). A TV series adaptation, written by David Benioff, D.B. Weiss, and Alexander Woo, has been ordered by Netflix.