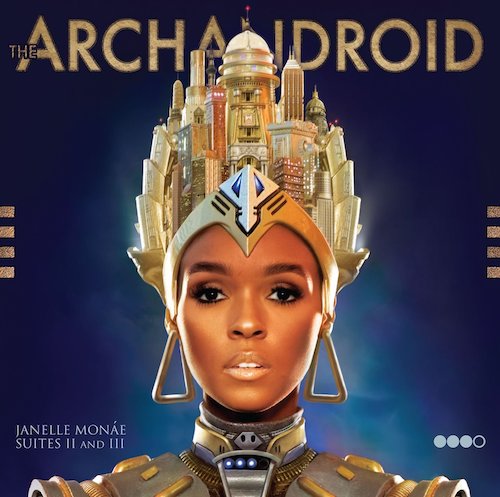 Monáe’s The ArchAndroid (Suites II and III) is the sequel to the singer, songwriter, and actress’s debut EP, Metropolis: The Chase Suite (2007); together with The Electric Lady (Suites IV and V) (2013), these releases form a single sci-fi “Emotion Picture” titled Metropolis. A psychedelic, futuristic funk and soul concept album, The ArchAndroid pays homage to P-Funk, Sun Ra, and OutKast, as well as to Ziggy Stardust (which I’ve included on my list of the best New Wave Sci-Fi adventures). Our protagonist, Cindi Mayweather, is an android cloned from Monáe. In Metropolis: The Chase Suite, she was punished for falling in love with a human; here, as well as in Electric Lady, Cindi evades Droid Control and starts an uprising to liberate Metropolis. Highlights include the funk-rap “Dance or Die,” the jazz-funk “Locked Inside,” the new wave and Afro-funk “Cold War” (the minimalist video for which is very moving), the fiery “Come Alive (War of the Roses)”; and the Lauryn-Hill-esque “Neon Valley Street.” Not to mention “Tightrope”, one of the best songs of the era — about which I’ve written before. The ArchAndroid is a call to “androids” — those othered by a society that discriminates based on creed, sex, orientation and identity — to figure out who and what they love.

Fun fact: In interviews, Monáe has explained that she was inspired by Fritz Lang’s Metropolis — and in particular by an intertitle from the 1927 movie insisting that “the mediator between the hand and the mind is always the heart.”