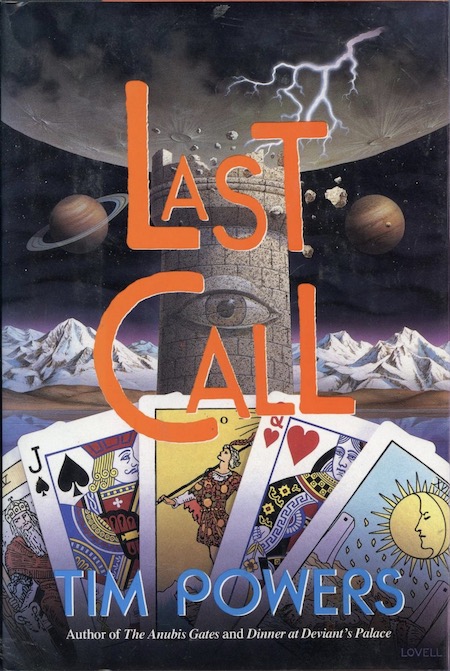 Some twenty years ago, professional gambler Scott Crane lost his soul in a card game; now, he wants to win it back. Along the way, people will try to kill him; he will discover the secret-secret history of Las Vegas (Bugsy Siegel, for example, founded Sin City with arcane ulterior motives); and he will find himself drawn into Assumption, a dangerous card game — part poker, part divinatory tarot. (Did you know? The origin of playing cards is obscure; the deck we know seems to have been imported to Europe from the East — by gypsies, perhaps, or crusaders.) Psychic possession, by an immortal creep, who happens to be Crane’s father, is a plot point in this proto-New Weird urban fantasy; ancient rites are enacted using bathetic contemporary props; T.S. Eliot’s “The Waste Land” offers helpful clues. Slow-moving at first, as we learn about the rules of magic in the bizarre yet familiar world that Powers has created, the story gets tense during its final 100 pages. An apophenic thriller reminiscent of Powers’s friend Philip K. Dick.

Fun facts: Winner of the World Fantasy and the Locus Awards, Last Call is the first installment in a loose trilogy that includes Expiration Date (1995) and Earthquake Weather (1997).