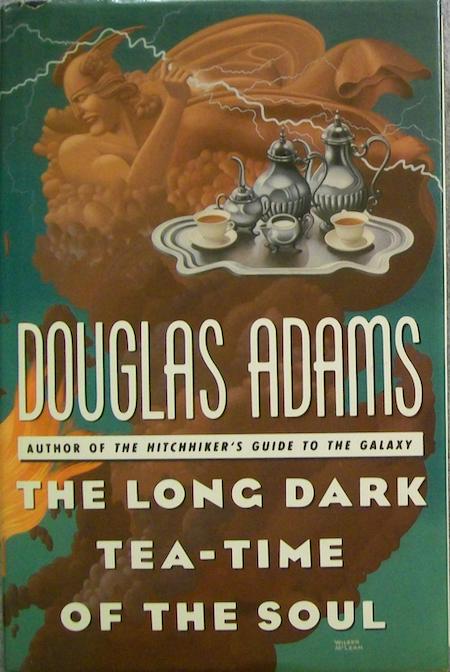 In Dirk Gently’s second outing, London’s one and only holistic detective is consumed with guilt when his client, a record label executive, is found decapitated; he’s assumed that the man’s ravings about a seven-foot-tall, scythe-wielding monster, and a contract signed in blood, and something about potatoes, were mere delusions. The perpetually broke, intermittently psychic private eye investigates the matter — and in doing so uncovers a pseudo-conspiracy involving (and victimizing) the Norse gods, not to mention an exploding Heathrow check-in counter, a nose-biting eagle, a malfunctioning Coca-Cola vending machine, an I Ching calculator, an attractive American woman, and a god who may have bestowed his powers on a Trump-esque lawyer. All of which are, of course, connected. Can Gently bail Odin, Thor, and the rest of the pantheon out of trouble? Will he ever clean out his refrigerator? Will he get paid? From the sublime to the ridiculous, this might as well be Adams’s motto.

Fun facts: Adams first used the mock-portentous phrase “the Long Dark Tea-Time of the Soul” in Life, the Universe and Everything to describe the wretched boredom of immortality. Adams began working on a third Dirk Gently story, which he abandoned. He planned to salvage parts of it for a sixth and final installment in the Hitchhiker’s series; however, he never ended up finishing either book. The unfinished MS was published in the 2002 collection The Salmon of Doubt: Hitchhiking the Galaxy One Last Time.