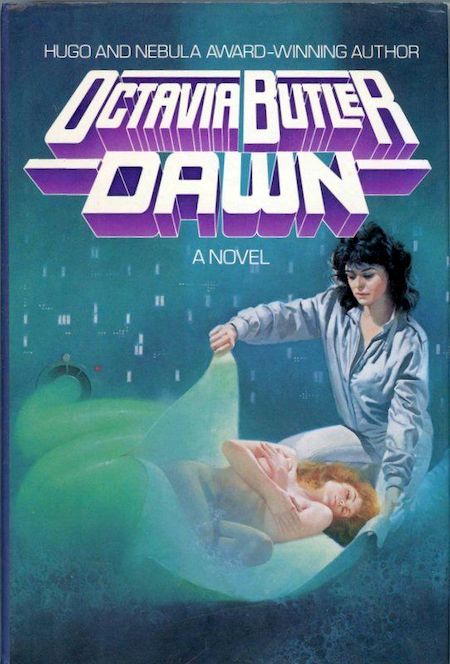 The first installment in Butler’s Xenogenesis trilogy (also known, collectively, as Lilith’s Brood) begins with the reawakening of Lilith Iyapo, a young black woman who was abducted from a post-apocalyptic Earth by an alien race, the Oankali… 250 years ago. The Oankali, who possess the ability to interbreed with any humanoid species, travel the galaxy doing so; they manipulate the genes of their offspring as needed to allow these new species to thrive in particular environments. The nearly extinct humankind has obviously failed, they inform Lilith… so why doesn’t she help them oversee a program of breeding little tentacled Oankali/human babies? Lilith is caught between a rock and a hard place: her fellow human survivors have a tendency to be xenophobic, violent, and misogynistic; while the Oankali are peaceful and reasonable… yet they view humans as an inferior species, without inherent rights. If it sounds to you as though Butler is exploring themes of sexuality, gender, race, and species in a nuanced, complex fashion, you’re right; she’s also recapitulating not only the story of African slaves in America, but the story of their descendants’ struggle, as well. Lilith is a strong character, yet within the context of Oankali imperialism, she lacks agency. Like Butler’s other black female characters, she refuses to capitulate to either/or choices.

Fun fact: The sequels to Dawn are Adulthood Rites (1988) and Imago (1989). In 2017, it was announced that Ava DuVernay will adapt Dawn for television, with director Victoria Mahoney and producer Charles D. King. This will be the first on-screen adaptation of Butler’s writing.