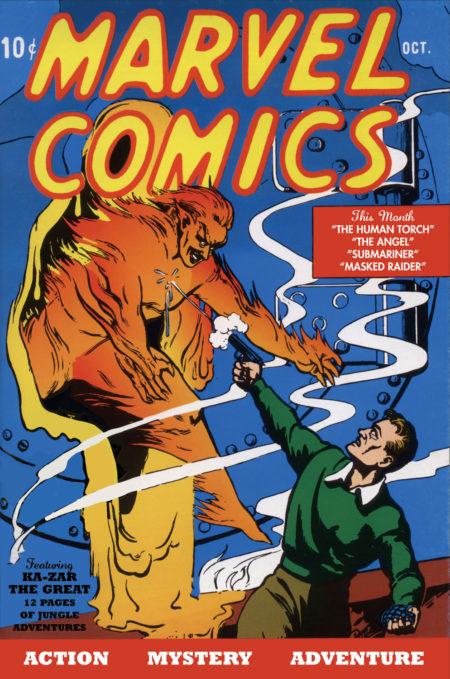 Marvel Comics started in 1939, though not exactly as such. The popularity of Superman (who debuted in Action Comics, in 1938), Batman (Detective Comics, 1939), and other superheroes led Martin Goodman, a New York-based publisher of pulp magazines such as All Star Adventure Fiction, Complete Western Book, and Mystery Tales, to start a comics division within his company, Timely Publications. Timely Comics’ Marvel Comics #1 (Oct. 1939) featured the first appearance of Carl Burgos’s android superhero, the Human Torch, and the first generally available appearance of Bill Everett’s undersea antihero Namor the Sub-Mariner. This content was provided by comic-book “packager”; but after Marvel Comics #1 sold nearly a million copies (in two editions), Goodman hired comics writer-artist Joe Simon as Timely’s first editor. Simon brought along his friend Jack Kirby, a talented young artist with whom he’d worked on Blue Bolt; the Human Torch and Sub-Mariner were soon joined by Simon and Kirby’s Captain America. A 16-year-old Stan Lee, a cousin of Goodman’s by marriage, also joined Timely in 1939; he was promoted to interim editor a few years later, after Simon and Kirby left for the fledgling DC Comics. In the early ’60s, Lee and Kirby’s Fantastic Four and other titles would revolutionize the medium; by then, Timely had been renamed: Marvel Comics.