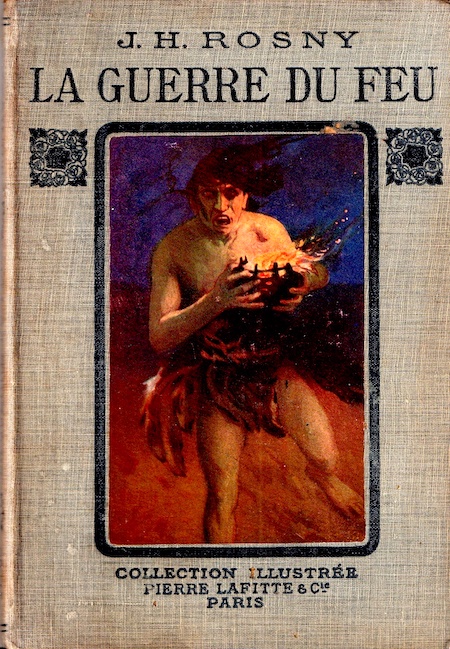 At some point during the Ice Age, the people of Ulam — a proto-Franco-Belgian Neanderthal tribe — are attacked by a rival tribe, and their precious fire is stolen. (Although they know how to tend a flame, they can’t generate a new one.) The tribe’s leader promises a woman to whichever young warrior succeeds in bringing back life-giving fire to the tribe. This is a slim novella, but it is action-packed: Naoh, our protagonist, and his two comrades encounter monstrous beasts, alien hominid tribes (some of which appear to be proto-Asian, proto-Scottish, etc.), and must use their wits to overcome all sorts of obstacles. In important ways, Quest for Fire is the ur-text for Goscinny & Uderzo’s Asterix comics: Just as Asterix and Obelix help invent everything from bull fighting in Spain to Swiss cheese in Switzerland, the Ulam questers discover laughter and other crucial early-human technologies. The book’s ending is, I’m sorry to report, a sexist one.

Fun facts: “J.-H. Rosny” was the pseudonym of two Belgian brothers who, once they ended their collaboration, added “aîné” (the elder) and “jeune” (the younger) to their monikers. Rosny aîné is considered the most important pioneer in French-language science fiction, after Jules Verne. This book was adapted as a 1981 film starring Ron Perlman, Rae Dawn Chong and Everett McGill; it has a cult following.