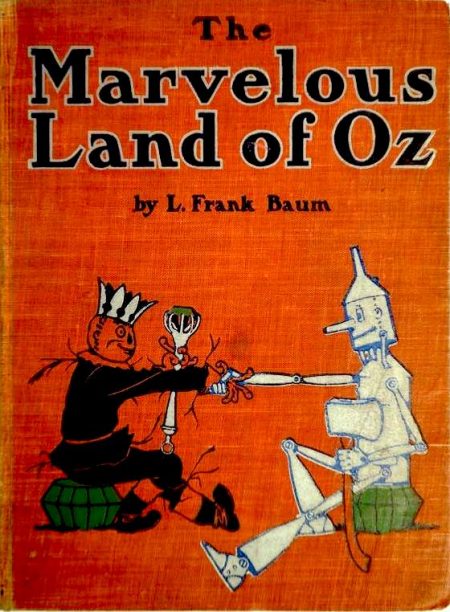 In the first sequel to the bestselling The Wonderful Wizard of Oz (1900), an orphan named Tip cobbles together a wooden scarecrow of sorts, with a pumpkin head — in order to startle his guardian Mombi, a cruel witch. Mombi uses a life-giving powder to animate “Jack Pumpkinhead,” thus introducing one of L. Frank Baum’s great characters. Tip steals the powder, animates a wooden sawhorse for Jack to ride, and flees for his life before he’s transformed into a garden ornament. Baum wrote The Marvelous Land of Oz with a stage production in mind, hence Tip’s encounter with General Jinjur and her chorus line-like female army… who are headed to the Emerald City to depose the Scarecrow. During the ensuing chaos, Tip and Jack help the Scarecrow flee; they head to the castle of the Tin Woodman, who now rules the Winkie Kingdom. Jinjur recruits Mombi to help stop the counter-revolution, so Tip and his friends must recruit more unlikely comrades — including Mr. Highly Magnified Woggle-Bug, Thoroughly Educated, and a field-mouse army. In the end, the good witch Glinda informs the counter-insurgents that the rightful ruler of Oz is Ozma… a princess who’d been turned into a boy! But what’s become of her?

Fun facts: Elements from The Marvelous Land of Oz were incorporated into the 1985 movie Return to Oz — whose stop-motion animation (by Will Vinton) and animatronics are, at times, truly terrifying.