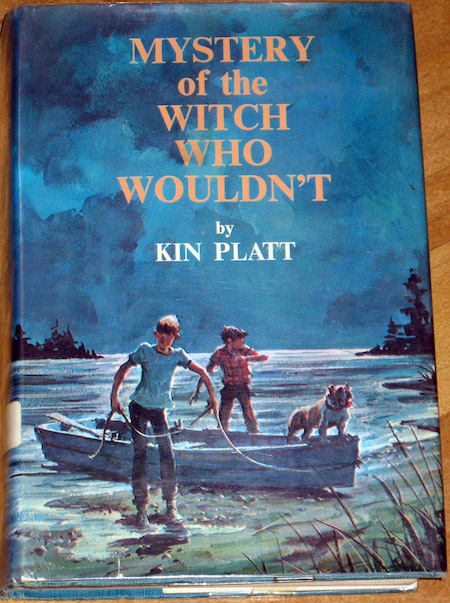 Kin Platt’s supernatural/crime adventure Mystery Of The Witch Who Wouldn’t.

This is a sequel to the entertaining, Edgar-award winning YA treasure-hunt adventure Sinbad and Me (1967), in which teenage friends Steve and Minerva unravel an 18th-century mystery in Hampton, Long Island — where Minerva’s tough-guy father is sheriff. (Sinbad is Steve’s English bulldog.) This time, Minerva begins to act strangely — as though she’s been hypnotized; and so does her family’s maid. Meanwhile, a time bomb nearly kills both Steve and the sheriff. With the help of his brainy friend Herk, Steve investigates the witch who wouldn’t — that is to say, a local sorceress who refuses to help criminals steal a local scientist’s secrets. The author has done his homework: We learn a lot about spellcraft and occult practices, not to mention a thing or two about Aleister Crowley. Demons are summoned! In the end, it’s up to Steve to rescue Minerva from a storm-ravagd harbor island… before it’s too late. An important part of this book’s charm, for me, is the lack of parental supervision: Steve, Minerva, and Herk do more or less whatever they please.

Fun facts: Platt, who in the ’30s wrote radio comedy for George Burns and Jack Benny, and in the ’40s and ’50s wrote and drew now-forgotten comic books, also wrote a couple dozen mysteries under various pen names. He is perhaps best-known today, however, as author of one of my all-time favorite children’s picture books, Big Max (1965).