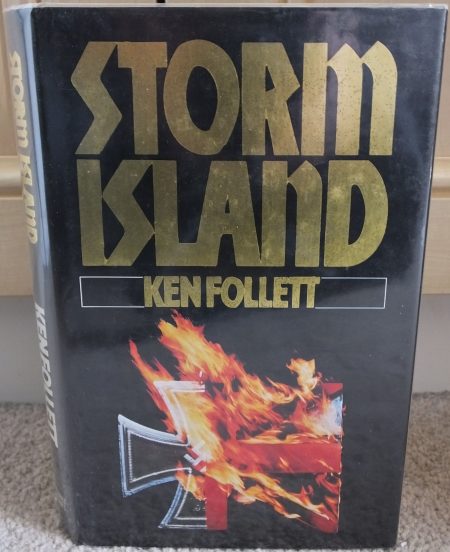 Ken Follett’s WWII espionage adventure Storm Island (aka The Eye of the Needle).

I’m not a big fan of Follett’s bodice-rippers, but this one — the bestselling author’s first bestseller — holds up better than most. The plot concerns the real-life Operation Fortitude, a World War II military deception employed by the Allied nations as part of an overall deception strategy during the build-up to the 1944 Normandy landings. A German operative operating under the name Henry Faber — he works in a London railway depot, collecting information on troop movements — is the last enemy spy in England; the others have all been captured. A widowed history professor, Godliman, and an ex-policeman, Bloggs, are hot on Faber’s trail… but he succeeds in discovering the secret of Operation Fortitude, taking photos that will aid Germany’s war effort, and fleeing to Scotland — where he will be picked up by a U-boat. They track him to Aberdeen, where Faber ends up shipwrecked on the isolated Storm Island. (Maybe I like the book because its setting is a bit Buchan-esque?) There, he encounters David, a crippled and embittered RAF pilot, and his beautiful wife Lucy — who falls for the dashing Faber. The success or failure of the Allied war effort is in Lucy’s hands….

Fun facts: Storm Island won the 1979 Edgar Award for Best Novel from the Mystery Writers of America. Richard Marquand adapted the book as a 1981 movie starring Donald Sutherland; subsequent editions of the book bear the movie’s title: The Eye of the Needle.