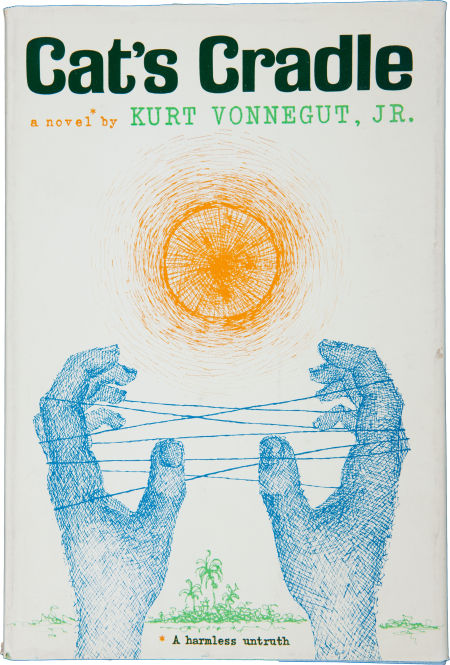 A cat’s cradle is a string figure created as the result of a children’s folk game; Vonnegut uses this figure as a metaphor for humankind’s proclivity to discover meaning where there may in fact be none. The novel is narrated by John, a writer interviewing the children of Felix Hoenikker, a (fictional) physicist who’d helped develop the atomic bomb. John discovers that Hoenikker — driven by scientific zeal, and without any ethical consideration for possible consequences — had developed a substance known as ice-nine, which upon contact with liquid water transforms it into ice; the danger, however, is that ice-nine might come into contact with one of the world’s oceans — an apocalyptic scenario. John accompanies Hoenikker’s son, Franklin, to a (fictional) Caribbean island, San Lorenzo, where he discovers Bokononism, a utopian religious movement combining irreverent observations about life and God’s will with eccentric, harmless rituals. As it turns out, Franklin is in possession of ice-nine… and the world may be doomed. As with Beckett’s Endgame, here we find that social and cultural forms offer no help when we’re faced with the end of everything.

Fun fact: After turning down his original thesis in 1947, the University of Chicago awarded Vonnegut a master’s degree in Anthropology in 1971 for Cat’s Cradle.