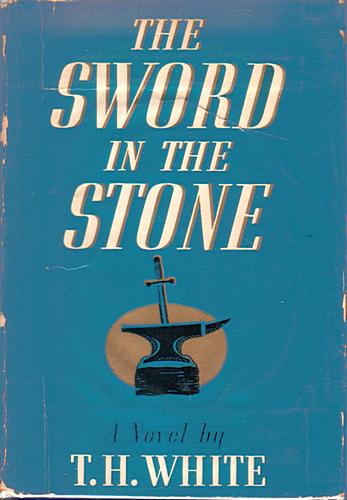 T.H. White’s Arthurian fantasy adventure The Sword in the Stone.

When the Wart, a young squire-in-training living under the protection of Sir Ector, in early 13th-century Britain, encounters the eccentric, time-traveling (and time-confused) wizard Merlin, little does he suspect what kind of tutoring that he and his foster-brother, Kay, a knight-in-training, will receive. When the Wart becomes an ant, for example, he learns a thing or two about totalitarianism and conforming to expectations; when he becomes a fish in the castle’s moat, he experience an unjust world where might makes absolute right; when he becomes a goose, he experiences a mutually supportive, egalitarian social order without materialism, hierarchy, or violence. Along the way, the Wart gets an adolescent’s view of medieval life — the hunting, the rituals around knighthood, the jousting. Comic relief is provided by King Pellinore, whose battles with Sir Grummore and endless pursuit of the Questin’ Beast are truly wonderful; thrills are provided by Robin Hood, particularly the bad-ass Maid Marian who excels at tracking… and is a fierce warrior for justice. This is a leisurely, episodic yarn with an eye-opening reveal.

Fun facts: This is the first installment in a tetralogy, collectively titled The Once and Future King; the next book in the series is The Witch in the Wood (1939). White wrote most of this material while living in Ireland, as a de facto conscientious objector during WWII. The 1960 Broadway musical Camelot and the animated 1963 movie The Sword in the Stone were loosely inspired by White’s oeuvre.