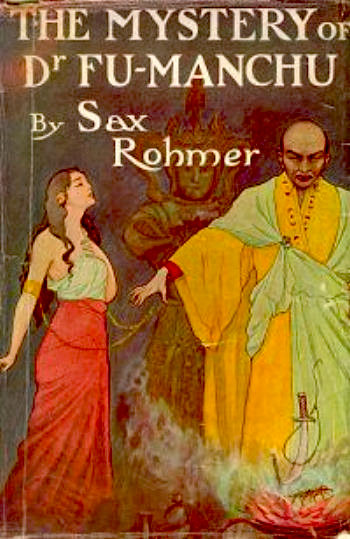 In this first Fu Manchu novel, assembled in 1913 from stories published in magazines during 1912, colonial police commissioner Nayland Smith is in hot pursuit of Fu Manchu, an agent of a Chinese secret society, the Si-Fan. A brilliant scientist and criminal mastermind, Fu Manchu has relocated from China and Burma to East London’s Limehouse district, from where — Smith believes — he is orchestrating a wave of assassinations targeting Western imperialists. Oh, and he appears to be kidnapping Europe’s best engineers and smuggling them back to China for some nefarious purpose, too!

Fun facts: Rohmer’s Fu Manchu character would inspire racist depictions of Asian sci-fi/fantasy villains from Ming the Merciless to Dr. No. The character was also featured in movies, TV, radio, comic strips, and comic books through the middle of the century; these latter entertainments — which depicted Rohmer’s villain with a long, drooping mustache (not mentioned in the books), has led to that style of facial hair becoming popularly known as a “Fu Manchu.”