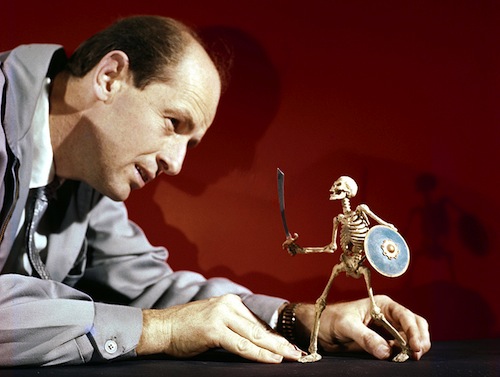 If you were ever sick in bed, as a child, during the pre-cable Seventies or Eighties, then perhaps on those sick days — when the sun lit the carpet in warm unwelcome squares, casting reflections onto the screen as you nibbled your crackers — you had the great good fortune of seeing, on your television with its few lousy UHF channels, a movie like The Beast from 20,000 Fathoms (1953). Or It Came from Beneath the Sea (1955), or Earth vs. the Flying Saucers (1956), or The 7th Voyage of Sinbad (1958), or Jason and the Argonauts (1963). The stop-motion animation in these movies was done by RAY HARRYHAUSEN (1920–2013). Capital-A art announces itself with a blandishment of trumpets, gaudy gallery shows, retrospectives, books and chin-scratching dialogues. And then there is sub rosa art, the kind that makes a small nest in an unlit corner of your mind, helping to form you and who you are without you even realizing it. Harryhausen, the Master of Stop-Motion Animation, made the latter type of art. Today’s digital special effects houses are obsessed with realism — ever more realistic scales, smoke, fire, jaws. Harryhausen’s work is better because it’s not realistic… it’s magical. His monstrous crabs, vampires, imps, trolls, dragons, and UFOs capture a fantastical whimsy that is of this Earth yet simultaneously offers a glimpse into a freakish realm beyond.

On his or her birthday, HiLobrow irregularly pays tribute to one of our high-, low-, no-, or hilobrow heroes. Also born this date: Breece D’J Pancake, Stokely Carmichael, Antoine de Sainte-Exupéry.