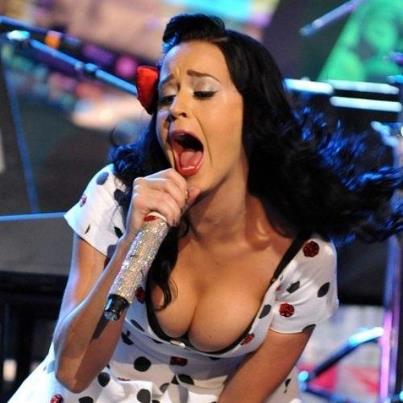 I’d know her signal anywhere. That’s how I think of KATY PERRY (Katheryn Hudson, born 1984), whose voice-synthesis setting is the most distinctive of background noises as cars speed by or gyms rotate their soundfiles. Perry’s style is a kind of self-aware ringtone, orchestrated inventively; everything needs to be a team effort in these recessionary times and as a lifelong mainstream-comicbook fan I’ve never begrudged the concept of art by assembly-line — the parts need the sum, all modern mass culture will be embraced by a community and so it can be made by a committee, and assembled pop can be as much artisanship as manufacture. There’s still a “me” in “team” somewhere, and Katy Perry makes everyone think she’s talking about you — affirmations you can’t get out of your head, since she already knew what you were thinking. A consciously anonymous persona yet a conspicuously anomalous presence, seemingly peeled from 1940s aircraft paintings or racy wall calendars and thus literally one-dimensional yet monumentally inescapable, Perry is pure style but she feels like the essence of an age. While evoking a far-off era in which people last faced war and economic collapse and a contentious gender-jostle in workplace and society and needed to feel better. (The album out three days ago, serendipitously sharing titles with the NSA’s all-seeing spy program, also downloads ’80s diva-nostalgia, third-world sonic souvenirs, celeb mysticism and some true transcendence; her wardrobe has many hangers yet to be revealed.) She doesn’t project the program-override of a Gaga, who seems to be the irreplaceable part in her art-factory, but Perry pilots her aircraft well. She may be like the puppy in the space-capsule, and a few years from now they won’t even need the puppy, but right now that rocket is a firework, headed straight for the sky and making it seem more wide open than it otherwise possibly could to workers climbing out of Depression and women rising toward the still-hovering glass ceiling and young people reaching for an unguaranteed future if they ever dared look down.

On his or her birthday, HiLobrow irregularly pays tribute to one of our high-, low-, no-, or hilobrow heroes. Also born this date: Pablo Picasso, Claude Cahun, Zadie Smith.

READ MORE about members of the Social Darwikian Generation (1983-92).