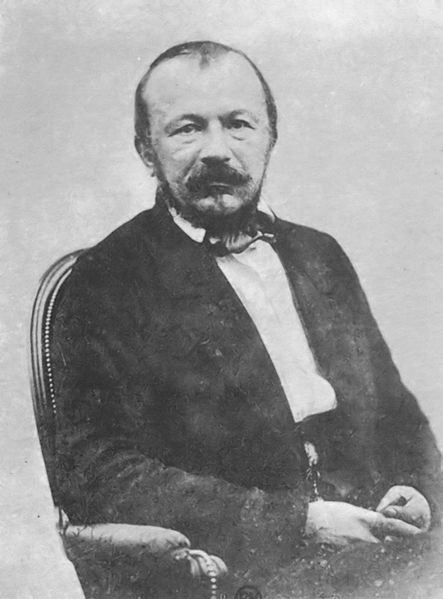 GÉRARD DE NERVAL (Gérard Labrunie, 1808–55) achieved early renown thanks to his translation of Goethe’s Faust (in which Satan was portrayed as a dandy); and his posthumously published autobiography Aurélia has been credited, by such admirers as René Daumal and Antonin Artaud as having introduced irreality — an uncanny slippage between reality and dreams, myth, magic, and the fantasies of the unconscious — into French literature. (André Breton’s First Manifesto of Surrealism: “Nerval possessed to a marvellous degree that spirit with which we claim kinship.”) Yet these days, the only thing most of us know about him is that he supposedly paraded a lobster on a pale blue silk leash through the gardens of the Palais-Royal. Typically understood today as nothing more than bohemian self-promotion, in fact this type of activity on Nerval’s part ought to be regarded as an early, crypto-political mode of street theater. In Paris during the late 1820s and early 1830s, Nerval was a member of the Bouzingos (Shit-Heels), a cohort — whose number included Théophile Gautier, Petrus Borel, and Philothée O’Neddy — of aesthetic separatists for whom irony and ostentatious uselessness served as a last-ditch redoubt against the inexorable advance of Progress, a religious cult (in their analysis) whose doctrine of efficiency and utility was in those days just beginning to leak out of the economic sphere into society and even culture. (“Nothing is truly beautiful unless it is useless,” insists the preface to Gautier’s Mademoiselle de Maupin.) It was Nerval who coined the term “ivory tower” to describe an idealized refuge from the vulgar bourgeois era. He never found one: At the age of 47, Nerval hanged himself from a basement window grating.

On his or her birthday, HiLobrow irregularly pays tribute to one of our high-, low-, no-, or hilobrow heroes. Also born this date: Arthur Conan Doyle, Morrissey, Arthur Cravan, Sun Ra.