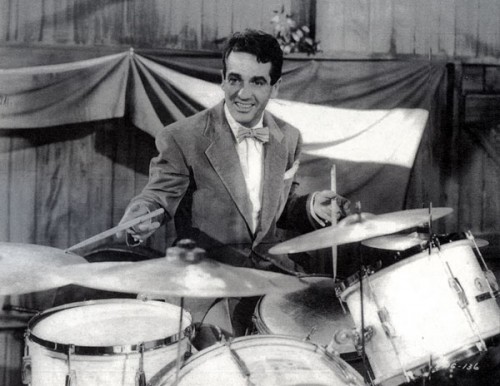 GENE KRUPA (1909–73) is perhaps best known for helping develop and then popularizing the drum kit solo during the big band era — most famously with Benny Goodman on the smash hit “Sing Sing Sing” (written by later-great Louis Prima). A Chicagoan of Polish extraction, he ended up on the largest stages in the world but never lost his sense of humanity. For one thing, during an era where it was not only not in vogue but downright dangerous, Krupa was a champion of civil rights and integration. He was also just a mensch, generally. In one of the more famous Gene Krupa —Buddy Rich drum battles, broadcast on the Sammy Davis Jr. Show in 1966, there is a telling moment. At one point Rich, who was a notorious monster both behind and away from the kit, and was an upcoming drummer superstar, cockily looks on as Krupa does a measured solo without a lot of flash, before responding with a dizzying solo that defies imagination. He clearly believes that his solo has blown away the older man to his left. Yet Krupa’s secret half-smile seems to signal that he knows his more engaged and beautiful solo, while not as flashy, left Rich looking like a chump. I don’t think that comes from talent; I think that comes from a deeper space.

KRUPA in BALL OF FIRE:

On his or her birthday, HiLobrow irregularly pays tribute to one of our high-, low-, no-, or hilobrow heroes. Also born this date: Captain Beefheart and Earl Hooker.