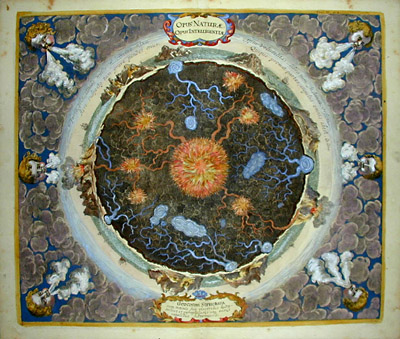 Three hundred and fifty-some years before the invention of the Internet, ATHANASIUS KIRCHER (1602-80) was the Internet. Blessed with a uniquely curious and inductive mind, Kircher had in his hands the greatest store of accurate information ever assembled (thanks to the vast information-gathering apparatus of the Jesuit missionary force at the height of its powers) and the will to bend it to his desire. Curious as to the functioning of volcanoes, he had himself lowered into a very active Vesuvius in 1638, providing the germ for Mundus Subterraneus (1665), a sprawling work on the functioning of the earth’s interior. To prove that flowers are attracted to the sun (in pursuit of proof that “magnetism” ruled everything), he floated a cork in water, attached it to a sunflower and used it to keep time; it had some trouble with wind, but otherwise worked. (A typically cranky Descartes, misunderstanding Kircher’s experiment, uttered an accidental truth by saying “he was possessed of an aberrant imagination.”) Kircher invented Egyptology as a field of study, was the first to describe the aeolian harp, collected the Western world’s knowledge of China, and proved that the Tower of Babel could not have reached the heavens — in order to reach the Moon it would have had to have been 178,672 miles high, and so massive that it would have tipped the Earth out of its central place in the universe, causing an end to Creation (well, two stars there, anyway). Kircher’s Museum Kircherianum was the world’s greatest place to find science, cryptozoology, reproductions of antiquity, and hydraulic automata that would have made Jules Verne blush, all pressed together like siblings. It’s been said that he was the last man to know everything; as the world’s information networks became more distributed, and information less centralized, another Kircher became an eternal impossibility.

On his or her birthday, HiLobrow irregularly pays tribute to one of our high-, low-, no-, or hilobrow heroes. Also born this date: E.E. “Doc” Smith.