HiLobrow.com has curated a collection of our favorite recent blog posts by comic-book scriptwriter and translator Adam McGovern. This is the fifth in a series of ten installments. 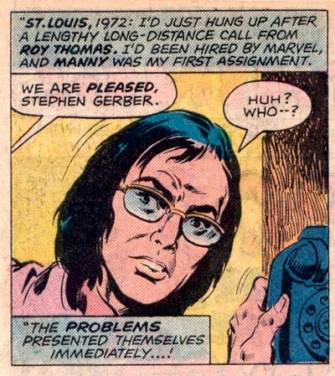 The comics world — and the whole canon of contemporary culture — lost one of its most blessed contributors Sunday, February 10, when Steve Gerber died of a rare lung disease. We lost him, but many of us had already been given things by him to last our own lifetimes.

Steve — I interviewed him once and exchanged a few emails; but some artists project themselves and prompt your self-revelation with an intimacy and honesty it’s hard not to think of as that of a friend — Steve fought depression for most of his life, and dispelled disappointment in an often-indifferent medium. No one who read his comics from their earliest appearance didn’t realize that something new was happening — an insightful wit about comics’ ridiculous worlds somehow matched with a redemptive wonder at these imaginative landscapes’ possibilities. The bizarre and satiric spin he put on even mainstream titles like The Defenders was the mark of the unconquerable outsider, and the empathy he showed with social misfits in books like Man-Thing and Howard the Duck may have literally saved my life, and probably many other misfit kids whom the world hadn’t given a handbook for how to fit in while still liking yourself. Steve gave us our newsprint, off-register bible, and it was all about growing so it never had to be outgrown.

Steve was one of the funniest and most inventive talents the medium has ever known, paradoxically setting a standard for incomparable individuality. A world where Peter Milligan, Grant Morrison and Gail Simone flourish is a world Steve Gerber made. Many of us also knew him from the ongoing masterwork of his own life, in dispatches on the appetizingly-named Steve Gerblog. I’ve always been of two minds about writers being diverted from their holy purpose to let us know what was on the breakfast menu, but of course now I treasure every insight into what made Steve tick (and opportunity to let him know what he meant to us) that this walk-in diary afforded. We followed his struggle with disease, depression, and a universe unwelcoming to creativity, and also were exposed to his hope, tenacity and humor, in ways which offered no reassurance but gave the true comfort of clear-eyed persistence. Steve was known as a cynic (or, in Howard the Duck’s famous formulation, a “fallen idealist”), but what he practiced was a relentless rejection of sentimentality and self-deception that, to those willing to look where he was pointing, represents not pessimism or a darkened lens on existence but an unclouded embrace of life’s real joys and its abundant (if intimidating) opportunities to make a mark and do good.

Steve did much good in his life, for the quality of culture and the rights of creators (for years Howard was one of the few characters that bore one of the creator-credits that are now much more commonplace in comics, thanks to Steve’s legal crusades). He was politically aware though steadfastly skeptical of individual politicians — still, he’d probably feel honored if you cast a vote this year for whomever you feel is most likely to get us universal healthcare (which he didn’t have), and, meanwhile, if you contribute to those who didn’t wait to get him what he needed and what we all deserve, at the Hero Initiative.

The selective, long-distance friendships of a mass-media age put fans at a strange advantage over loved ones — we who knew Steve by his works can say we saw him last soaring in the Helmet of Fate and facing dark forces with dimension-spanning confidence and indomitable wit, not fading away in a barren hospital room. But those who truly knew him — and, unlike us, were with him on that lonely last mile — may be feeling something of the same. Steve’s last work was one of his best, a re-imagining of the Doctor Fate character as a disgraced healer and apprentice mystic which probed the nature of existence — and exposed, by proxy, many of Steve’s own failings — in a way that’s very appropriate to both the end of a life and the intensity of how life should be lived. It now even seems fitting that he left the story halfway through. Steve Gerber will never be finished — and he’ll never, never end.