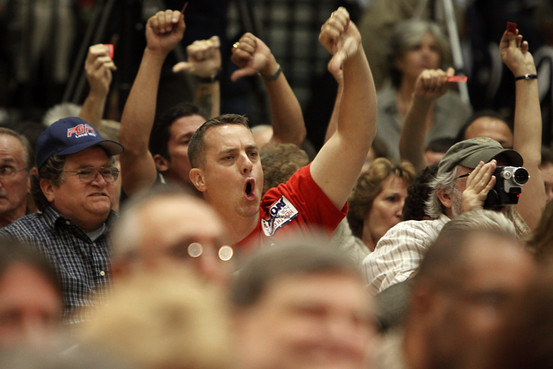 In today’s Wall Street Journal, Thomas Frank wittily and intelligently notes that high-middlebrow pundits have whipped their ground troops up into a backlash against a highbrow (or, really, an anti-high-middlebrow) upsurge “that maybe should have happened but that didn’t.”

Though Frank doesn’t use these terms, high-middlebrow neocons and neoliberals in the Bush administration, and at the Securities and Exchange Commission, led us off a cliff. But High Middlebrow has managed to make itself nearly immune to criticism and reform, much less abolition. So instead of slinking off in disgrace, high middlebrows have manipulated the Beltway’s Ayn Rand-worshipping anti-lowbrows into joining forces with their natural enemies, i.e., lowbrow populists and anti-highbrow zealots, in order to funnel American fear and rage towards the (relatively) highbrow Obama administration. And it’s working!

Today, from the floor of town-hall meetings and the heights of the Republican Party, alarmed Americans fret about secret socialists and denounce the president as a dictator. They make plans to pull their children out of school rather than have them exposed to his hypnotic oratorical powers. They quail at imaginary death panels, storm at imaginary threats to gun rights, and froth at an imaginary birth-certificate scandal…. The most notable literary response to last year’s financial crisis was not to turn to the obvious genre — books about Wall Street shenanigans in the 1920s — but to skip several historical stages and to go straight to Ayn Rand’s 1957 novel Atlas Shrugged, in which heroic titans of industry are persecuted by a meddling government.

This is how Middlebrow operates — outside the Highbrow/Lowbrow/Anti-Highbrow/Anti-Lowbrow rubric that we’ve all been trained to accept as natural and sufficient. Because it exists on the uncanny margins of this classic but outdated four-square rubric, Middlebrow is uniquely able to beguile highbrows, lowbrows, anti-highbrows, and anti-lowbrows alike. Middlebrow adopts aspects of each of these traditional, familiar dispositions as needed, cynically using them as leverage for its own ends.

Deploying anti-lowbrows, lowbrows, and anti-highbrows against highbrows, Middlebrow remains uncriticized. The following video making the rounds today, for example, amusingly attacks anti-lowbrows and anti-highbrows in the name of highbrow and lowbrow alike. Videos like this are fun! They make highbrows feel good! This kind of ideological back-and-forth sells newspapers and bumper stickers. Alas, because they’re blinkered, such efforts will never rid us of Middlebrow.